A laser technique best known for its use to remove unwanted tattoos from the skin is finding a second life in preserving great sculptures, paintings and other works of art, according to an article in the American Chemical Society's monthly journal, Accounts of Chemical Research.

The technique, called laser ablation, involves removing material from a solid surface by vaporizing the material with a laser beam.

(Art conservationists cleaned the two angels on the left with traditional restoration methods. They cleaned the one on the right using an advanced laser technique, which produced better results.)
A team led by Dr Salvatore Siano at the Applied Physics Institute-CNR in Florence, Italy, studied the results on several works of art. Among them are Lorenzo Ghiberti's gilded bronze panels Porta del Paradiso, or Gate of Paradise, and Donatello's Renaissance bronze statue of David.

Dr Siano said the work on the Gate of Paradise was the most important so far. "This was the first time a well recognised masterpiece was treated with laser cleaning," he said.

The team says the technique is now having a significant impact in the field of cultural heritage conservation. Wall paintings are the most recent application, and were a real test of the developing method, as Dr Siano explained: "This is a more delicate situation than metals or stone as the pigment is much more fragile."

The researchers point out that laser cleaning of artworks began about a decade before the techniques became well known for removal of tattoos from skin or removal of paints in industrial applications.

So why is laser cleaning preferable to traditional chemical or mechanical methods? Dr Siano said the absence of chemical agents makes the process more predictable. "Using chemicals means using something that can react all the time, even after one or two years.

"And if you compare it with mechanical means, the laser is able to distinguish what must be removed in a way that is much more selective than traditional techniques." 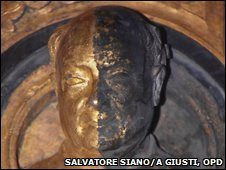 The difficulty is in choosing the right laser and sometimes, if it doesn't exist, having to build it. "When the laser doesn't exist you design the laser," said Dr Siano.

It is crucial the laser is deployed in the right hands. "A laser can be used for very fine cleaning with precise discrimination but it can also be used to destroy the layer.

"This is not just micro-sandblasting," said Dr Siano, who also teaches the technique to students at the Restoration School of the Opificio delle Pietre Dure in Florence.

"If the restorer doesn't have experience it's better to avoid their intervention," he warned.
Problems have had to be overcome. Discoloration of stone and metal after laser cleaning slowed the spread of the technique. The team says this has been addressed with a new generation laser and careful selection of the parameters set.

Underwater irradiation has been found to be very effective for archaeological silver which has developed a mineral shell. "In water you can increase the effect of the laser; it's a kind of underwater micro-explosion or micro-fragmentation.

"It's a very effective method. If you use a scalpel you have no way of ensuring discrimination between the encrustation layer and the original surface underneath."

Dr Siano's team has not yet tested the method on any easel paintings but it is something he is thinking about. "We need more observation and more insight before starting on anything, for example, by Botticelli.

"But maybe they don't need any cleaning anyway," he quickly corrected himself. Despite their successes, the team clearly do not want to imply any of the masterpieces are in particular need of the laser's attention.

Click here to read the full article: Advances in Laser Cleaning of Artwork and Objects of Historical Interest: The Optimized Pulse Duration Approach