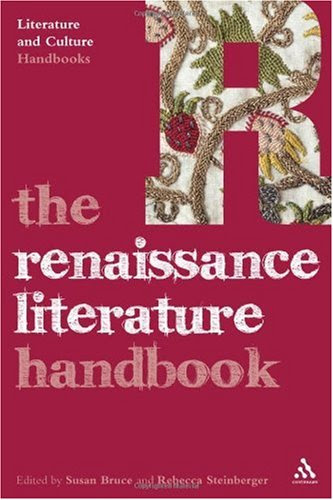 Rebecca Steinberger, Ph.D., department chair and associate professor of English at Misericordia University, has published her second book, an edited collection of essays and resources for students and teachers of Renaissance literature.

, published by Continuum Press, is one in a series of Literature and Culture handbooks designed for those studying the arts. Each handbook offers a series of collected essays and reference materials covering a certain period of English literature, including volumes on Victorian, 17th Century and 18th Century English literature.

In 2006, Steinberger received a call from a colleague in England asking if she would be interested in being a co-editor for the Renaissance-period handbook. “For each book, the series editors were looking for both an editor and submissions from both sides of the Pond, and I was thrilled to be asked to take the American lead role,” says the Shavertown, Pa. native whose career is devoted to teaching and research on English literature. “This series is the first of its kind that provides an educational guide on single periods of literature.”

Dr. Steinberger says she was honored to be asked to cover the Renaissance period, because it is such a “rich and lengthy” literary period. The Renaissance extended from 1485 to 1689. It was a robust and tumultuous time, and included the reigns of King Henry VIII and Queen Elizabeth, who was succeeded by James VI from Scotland.

“It was a high time for the arts and literature, and a time when publishing was taking off,” she said. “It offers a lot for students to learn and for professors to cover. This handbook brings a variety of resources together, including a glossary of key terms, time lines, historical context essays and critiques, and an appendix including notes on contributors as well as a guide to digital resources.”

Over the past four years, Dr. Steinberger has been involved in requesting and reviewing submissions from widely known scholars from both continents, compiling reference material and editing final copy. The completed 233-page book was first printed in the United Kingdom, and sold out in the U.S. “Before I had even seen a copy, I went to the Modern Language Association Conference in Philadelphia,’’ she said. “When I walked up to my publisher’s exhibit, I saw other handbooks in the series, but not mine. When I asked about it, I was told it had already sold out and there was a long list of orders. It was great feeling.”

,” was published in 2008. She is currently editing a collection of essays, “Encountering Ephemera from Shakespeare to Swift: Scholarship, Performance, Classroom,” a guide for teaching ephemeral matters in the classroom. The essays collectively work to define ephemera — materials or works that are designed to be short-lived and without lasting significance, as a complex and multi-faceted critical category in terms of its literary, cultural and historical significance.

She plans to edit a third collection of essays, in collaboration with two friends in honor of a mutual friend and literature colleague, Adam Max Cohen, a professor at the University of Massachusetts Dartmouth and scholar in Early Modern Cultural Studies. Cohen recently died from a brain tumor at age 38 and the volume will include some of his yet unpublished works.

Her current research includes the study of terror as a thematic thread through British literature. She is working on a book exploring the impact of historical violence and cultural conflict on the lives of those living in London and the resultant impact on literature. “Panic on the Streets of London: Cultural Conflict in the City,” is expected to be published in time for the London 2012 Olympics.

Dr. Steinberger received her Bachelor of Arts degree in English from Wilkes University and her master’s in English with a concentration in Medieval and Renaissance drama and Irish literature from the University of Scranton. She holds a doctorate in English literature and criticism from Indiana University of Pennsylvania. She joined the Misericordia faculty in fall 2000 and received tenure and promotion in 2006. She was appointed chair of the English Department in 2008. She teaches a variety of classes that include Ancient; Medieval Literary Texts, Modern World Literature, Restoration and 18th Century British Literature, Irish Drama, Theatre in Performance, Literary Theory and the Gothic Tradition and Shakespeare.