The Decline and Fall of the Mongol Empire

A new article examines how the four Mongol empires collapsed, and concludes "that in all cases, ‘fall’ was the result of internal factors, about which there was nothing that was inevitable, and that there is little evidence of a long ‘decline’." 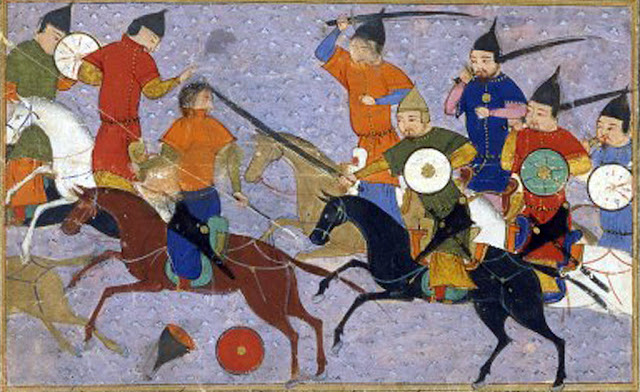 "The Decline and Fall of the Mongol Empire," by David Morgan, is published in a recent issue of the Journal of the Royal Asiatic Society. David Morgan is a Professor of History at the University of Wisconsin-Madison, and has written numerous articles and books about the Mongols and the Middle East.

He finds that many historians still take it as granted the idea first promulgated by Edward Gibbon from his book the Decline and Fall of the Roman Empire: “Empires may not fall until they have previously undergone a process of decline.” He asks if this was true for the Mongols.

In 1260 the Mongol Empire founded by Genghis Khan broke up into four smaller empires - the Yuan Dynasty in China, the Golden Horde in Russia and the Pontic Steppes, the Ilkhanate in Persia and the Middle East, and the Chaghatai in Central Asia. These four Mongol states each continued on and even expanded, at least until the 14th century. The Chaghatai Dynasty lasted until 1658.

Morgan analyzes each of these states and looks at the reasons behind for their collapse. He finds that in each case, they faced little outside threat, and fell because of internal factors.

The Yuan Dynasty, which was started by Qubilai Khan, ended in 1368, when the last Yuan (Mongol) emperor, Toghon Tem¨ur, was driven out of China and back to Mongolia. Morgan writes, "The predominant feature of the final years of Yuan rule, however – if one is looking for evidence of ‘decline’ – is the increasing frequency and seriousness of native Chinese revolts, especially in south China, and a loss of grip on the part of the central government. The Mongol armies were no longer of a quality to be able to deal effectively with these problems. More important, there were not enough of them; and the fourteenth-century neglect and impoverishment of Mongolia itself had meant that few new recruits could be hoped for from the homeland."

Despite this, Morgan believes the Yuan Dynasty could have fended off the Chinese rebellions and maintained their empire for years to come if had not been for some poor military decisions.

The article also deals with the Mongol empire in the Middle East, known as the Ilkhanate. Morgan rejects notions that there was a decline during the reign of the last Ilkhan Abu Sa’id (1316–35), citing some evidence that economically the Ilkhanate was more prosperous than ever. Instead, Morgan writes that " Abu Sa’id’s problem was much the same as Henry VIII of England’s: his difficulty in providing a male heir. Henry managed it in the end, after a fashion. Abu Sa’id did not, and there was therefore no unchallengeable member of the line of H¨uleg¨u available to succeed him when he died in 1335. Various expedients were tried by several factions. But essentially the throne was up for grabs, and the central government disintegrated as a result. Parts of the khanate fell under the control of what would now probably be called warlords – some Mongol, some not."

He also notes that two more nomadic empires - the Golden Horde and the Chaghatai Khanate - lasted much longer, and their collapses were due more to internal factors rather than any outside threat.

Morgan concludes, "Parts of the Mongol Empire continued for a very long time; and as it happens those were the parts which retained more of the traditional steppe lifestyle. Other parts collapsed much earlier, and those were the more sedentary areas, where more accommodation to local mores had been necessary, and where less of the nomadic lifestyle had survived. But even in those cases, an examination of the actual events suggests that the Mongol regimes could perfectly well have continued, had different decisions been taken at various points or had different circumstances prevailed." The article, "The Decline and Fall of the Mongol Empire" appears in Volume 19, Number 4 of the Journal of the Royal Asiatic Society (2009).