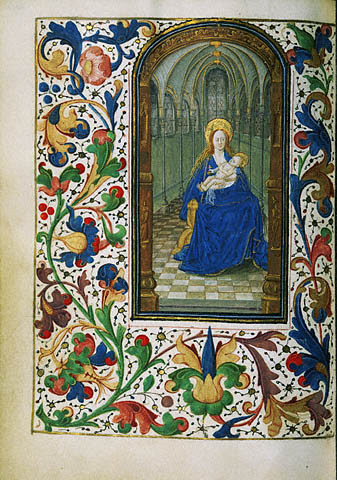 The architectural wonders of soaring cathedrals and majestic palaces are some of the greatest achievements of the Middle Ages and the Renaissance. On view at the J. Paul Getty Museum, in Los Angeles, California, March 2–May 16, 2010, Building the Medieval World: Architecture in Illuminated Manuscripts explores representations of medieval architecture in manuscript illumination where artists incorporated examples of medieval church and domestic architecture into scenes drawn from scripture, literature, and history. Architectural settings were also employed to symbolically convey the importance of individuals and events, and artists frequently used architectural elements as decorative motifs to frame text and images.

“This exhibition demonstrates how the daily presence of towering and monumental architectural forms in both cities and in the countryside fascinated medieval viewers and crept into the fictional world of the painted page,” explains Christine Sciacca, assistant curator of manuscripts and curator of the exhibition.

Images found in manuscripts offer insight into how medieval buildings were used as well as reveal the daily life that took place inside and around them. Manuscripts also frequently served as historical documents of medieval architecture. The dedication or renovation of a church was often represented in books of prayer and music created to celebrate the occasion. Manuscripts also depicted buildings associated with a book’s owner, constituting a kind of visual inventory of his architectural possessions. Some of the images found in this exhibition are schematic, merely suggesting the overall look of a structure, while others provide exact records of what particular buildings looked like when their images were painted onto the page.

Architecture was a frequent setting for biblical stories found in manuscripts, and in some cases buildings were themselves key elements in the narrative. Illustrations of these texts provide intriguing insights into the medieval understanding of architecture. Using their imagination to bring to life biblical stories, artists depicted abstract renditions of structures that could never actually exist as well as hyper-realistic depictions reflecting the time and place in which the book was made. Intended to accompany, embellish, and honor the word of God, scriptural images explored in this exhibition offer some of the best visual examples of medieval buildings.

Building the Medieval World also includes images of structures that have significance beyond their everyday use. Medieval artists depicted architecture not only to record the world around them but also to convey meaning. Architecture was often used to suggest the importance or holiness of a figure or event. Christ, the Virgin Mary, and the saints, as well as secular individuals, were frequently framed by structural elements such as the arch or the niche. Sometimes a particular building that played a key role in a saint's life became a symbol or a stand-in for the person.

The final section of this exhibition contains illuminated manuscripts that display columns, arches, niches, and tracery in their borders, enshrining text and image within the forms of medieval and Renaissance architecture. These bits of buildings were used for their aesthetic value and to suggest the grand edifices or sacred spaces they adorn.

Also included in the exhibition is a nineteenth century photograph from the collection of a medieval church, Saint-Ouen Church in Rouen. When placed alongside a manuscript illumination of the Virgin and child enthroned within a church the similarities are striking between the interior recorded in the photograph and that depicted in the illumination. The painted manuscript image practically functioned like a fifteenth-century snapshot. This comparison of images reveals that many manuscript illuminations are the best records of contemporary medieval architectural styles.