Norse Power! Deodorant that makes you smell like a Viking

"A team of scent scientists" have developed a new body spray deodorant that promises to give you that medieval warrior smell! Norse Power is an actual product, created by Visit York and the Jorvik Viking Centre and it helps recreate what a Viking probably smelled like.

What do you get in a bottle of Norse Power Deodorant For Men?


Michelle Brown, Marketing Manager of Visit York, explains, "Historical research indicates that the Vikings were quite particular about personal hygiene, especially when compared to the Anglo Saxons. But even so, this only meant washing once a week, which by today’s standards isn’t exactly the height of cleanliness! And for a Viking raider, who’d travelled hundreds of miles over land and sea, and spent their days fighting bloody skirmishes, it’s fair to say they wouldn’t always have carried the most alluring aromas around with them.

"With Norse Power we wanted to try and capture the sort of smells that would have been part and parcel of the lives of Viking warriors around the time that York was the Norse capital of England. But more than that, with all of the bath products, deodorants, perfumes and aftershaves available today, we wanted to give male visitors to York the unique chance to cast aside their allegiance to modern aromas and instead embrace the smells from an era of true warriors!"

There might be a few bottles of Norse Power still left at the Visit York Visitor Centre - go to http://www.visityork.org/ for more information.

Watch How European Borders Changed since the Middle Ages

This very cool video was found by @BeautifulMaps. It shows how the rise and fall of various states in Europe since the mid-twelfth century 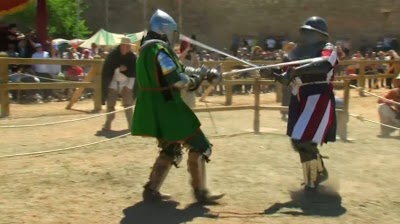 Poland's Marcin Waszkielis and Suzanne Elleraas of the United States took first prize in the male and female divisions of the Medieval Combat World Championships, which was held this week in Belmonte Castle in Spain.

The four-day event began on May 1st, with dozens of men and women competing in combat with the medieval longsword.

"The sport is based on the traditional 14th and 15th century tournaments, mostly the rules have been developed from a book by a guy called King René of Anjou and he wrote the seminal book of the tournament in the early 1400s," Martin Cazey explained to the NTD.TV.

Both the BBC and Ukraine News One were on hand to report on the tournament:

You can also see this slideshow of pictures from the Medieval Combat World Championships from Reuters.