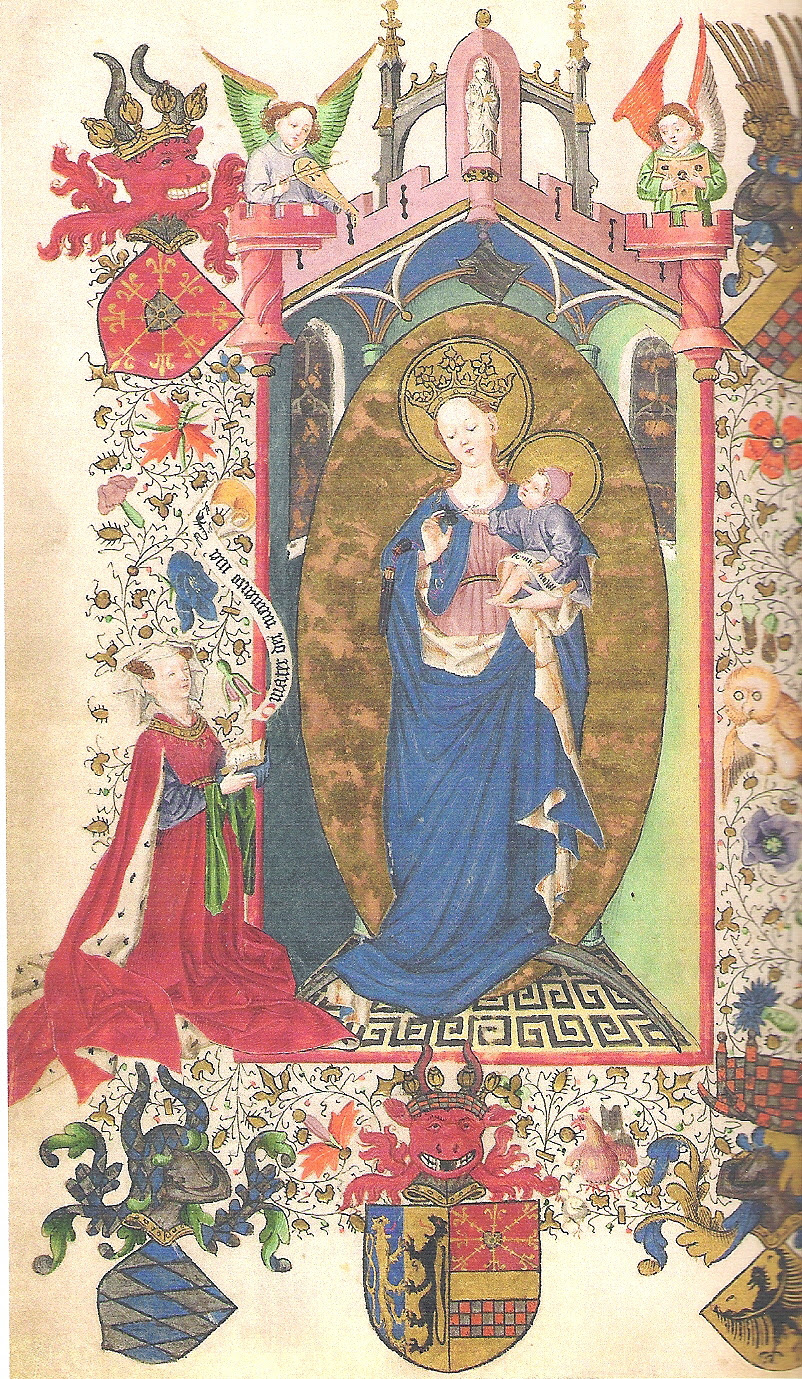 The Hours of Catherine of Cleves, a fifteenth-century Dutch manuscript that is among the most beautiful and sophisticated illuminated works ever created, is the subject of a major exhibition at The Morgan Library & Museum in New York City, from January 22 through May 2, 2010. Titled Demons and Devotion: The Hours of Catherine of Cleves, the show includes nearly a hundred individual pages from the lavishly painted manuscript, which has been disbound for this special occasion.

The title of the exhibition derives from the dramatic juxtaposition of numerous demonic creatures “lurking” within the pages of a book that is otherwise filled with devotional prayers. Catherine, an important duchess involved in an epic dynastic political battle for much of her life, hoped to use prayer to avoid eternal damnation to the realm of the demons so vividly portrayed. The exhibition is supplemented with illuminated works by both predecessors and contemporaries of the book’s anonymous artist, known to art historians as the “Master of Catherine of Cleves.”

“The Morgan is recognized internationally for its superb collection of illuminated manuscripts, and the Hours of Catherine of Cleves is indisputably one of the greatest,” said William M. Griswold, director of the Morgan. “Its pages are an extraordinary visual treat, amazing in their detail and stunning in their painterly beauty.”

THE HOURS OF CATHERINE OF CLEVES

Around 1440, Catherine, duchess of Guelders and countess of Zutphen, commissioned an illustrated book with devotions that she could pray throughout the day. Textually rich, in addition to the traditional Hours of the Virgin and Office of the Dead, it contains unusual prayers for the Hours of every day of the week, complemented with an appropriate votive Mass. The book also features an unusually rich suite of fifty-seven Suffrages, or petitions to individual saints. The manuscript is equally rich visually: it contains 157 (originally 168) miniatures. They reveal colorful landscapes and detailed domestic interiors. For example, in the miniature of the Holy Family at Work, Joseph planes a board and the Virgin Mary weaves while the infant Jesus takes his first steps in a walker. Throughout the miniatures are meticulously depicted buildings, textiles, furniture, jewelry, and even fish—painted over silver foil. Many miniatures comprise long, elaborate cycles of iconographic and theological complexity.

One such cycle includes eight miniatures about the legend of the True Cross, including rare illustrations of Adam on His Deathbed Dispatching his Son Seth to Paradise, Seth Planting a Branch from the Tree of Mercy in the Mouth of the Dead Adam, and, in the concluding scene, Miracles at the Pool of Bethesda.

The Hours of Catherine of Cleves is also famous for its innovative borders, no two of which are alike. Some depict such everyday activities as milking cows, churning butter, and baking bread. Still others are filled with butterflies, mussels, coins, fishnets, bird traps, flowers, vegetables, fruits, and even pretzels.

The Master of Catherine of Cleves is considered the finest and most original illuminator of the northern Netherlands. His is a balanced, almost classic style, with equal attention granted to naturalistic representation and overall harmony of composition and color. His interest in the realistic representation of light and textures derives from such predecessors as Jan Van Eyck and Robert Campin. His attraction to genre and everyday objects—far ahead of its time—was to flower in Dutch still-life painting during the seventeenth century.

Catherine of Cleves is known for two things: the magnificent illuminated manuscript that bears her name and the huge political battle she waged against her husband, Arnold of Egmond. Catherine (1417–1476), the great-great-aunt of Henry VIII’s fourth wife, Anne of Cleves, was involved in politics from an early age. At the age of six years she was betrothed, purely for dynastic and political reasons, to Arnold of Egmond, duke of Guelders and count of Zutphen (1410–1473). The marriage took place when Catherine was thirteen, in 1430. Although she bore her husband six children over the course of the next ten years, the marriage was not a happy one. In 1440 Catherine refused to live with her husband; she took up residence in castles in Nijmegen and Lobith.

Debt-ridden and involved in costly wars, Arnold was not the most successful of rulers. Eventually, Catherine and her only living son, Adolf, imprisoned Arnold and forced him to cede the throne to his son. Anarchy ensued and the familial conflict became international, resulting in Arnold securing his freedom in 1471. He regained his title and with new support from the famed Charles the Bold, duke of Burgandy, threw his son, Adolf, in prison. Arnold, however, died two years later, in 1473; he was followed by Catherine in 1476 and Adolf in 1477.

Mounted in frames or shown in cases, the leaves are exhibited in their original sequence when the manuscript, bound in one volume, rested in Catherine’s hands. (The manuscript was separated into two volumes in the nineteenth century by a bookseller who was able to make each volume look complete by cleverly mixing up the leaves.) 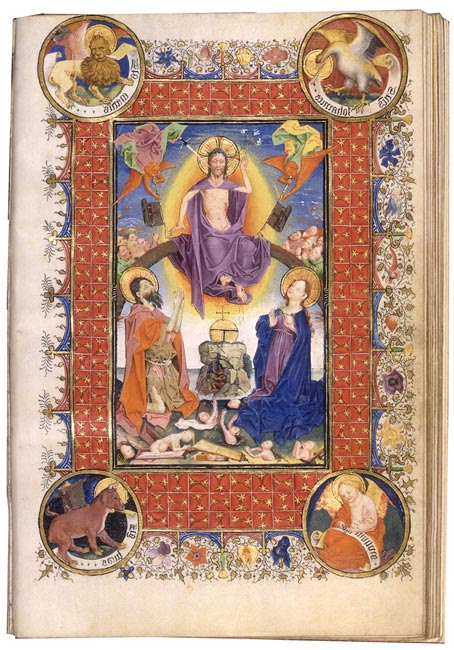 The exhibition begins with a dozen images from the heart of the book—the Hours of the Virgin. The famous portrait of Catherine praying to the Virgin Mary, surrounded by the heraldry of eight of her ancestors, is on display. The next section, the Hours of the Cross, is illustrated by a series of images of Christ’s Passion. Miniatures from the Weekday Hours follow, including two more portraits of Catherine. In one, she is distributing alms; in the other, she petitions the crucified Christ to seek her salvation from God the Father.

The exhibition also features illustrations for the Penitential Psalms and the Office of the Dead. One of the most striking miniatures is a representation of Hell—a proto-Boschian vision of eternal torture with devils casting the damned into a furnace-like prison, the entrance of which is a roaring beast’s gaping maw fanged with three sets of teeth. The final suite of miniatures includes twenty Suffrages.

The exhibition contains examples of the visual source material from which the Master of Catherine of Cleves derived his style, including works by the previous generation of illuminators. There is, for example, a manuscript illuminated by an artist nicknamed the Master of the Morgan Infancy Cycle. The eponymous codex, which was purchased by the Morgan in 1953, is open to an image of King David encircled by a legion of dragons whose twisted necks and strangled expressions offered the Master of Catherine of Cleves appropriate inspiration for some of his wild beasts. Also featured in this section is another Morgan manuscript, the Egmond Breviary. This codex, which belonged to Arnold, was illuminated by Dutch artists called the Masters of Zweder of Culemborg.

These artists seasoned a courtly style with a mastery of landscape and interiors; the inclusion of illumination by the Zweder Masters demonstrates how the Master of Catherine of Cleves was influenced by their creations, both stylistically and iconographically.

The exhibition opened in the fall of 2009 in the Museum Het Valkhof in Nijmegen, one of Catherine’s hometowns. The curators were Rob Dückers and Ruud Priem. The show at the Morgan is organized by Roger S. Wieck, curator of Medieval and Renaissance Manuscripts.

The exhibition Demons and Devotion is accompanied by three publications. A general volume, From the Hand of the Master: The Hours of Catherine of Cleves, edited by Dr. Anne Margreet As-Vijvers, is a monograph that reproduces thirty-five miniatures, with commentary, and includes essays on the book’s borders, the artistic sources of the artist, and the representations of children and domesticity. A scholarly book, The World of Catherine of Cleves: Devotion, Demons, and Daily Life in the Fifteenth Century

, edited by Rob Dückers and Ruud Priem, reproduces nearly two thirds of the manuscript’s miniatures and includes catalogue entries on additional codices by the artist as well as numerous scholarly essays, including one by Morgan curator Roger Wieck. A high-quality color facsimile, The Hours of Catherine of Cleves, with a commentary by Mr. Dückers, Eberhard König, Mr. Wieck, and others, reproduces all the miniatures and text pages in their original, fifteenth-century order.