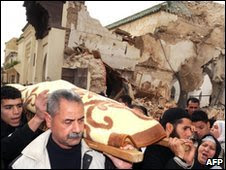 A 400 year old minaret has collapsed in the Moroccan city of Meknes on Friday, killing 41 people and leaving 75 injured. The tragedy has called into question the safety of Morocco's medieval sites.

The Lalla Khenata mosque minaret in the Bab el Bardiyine neighbourhood of Meknes collapsed during Friday's prayers, burying most of the 300 worshippers gathered there.

Interior ministry officials blamed the incident on heavy rain that had weakened the minaret.

Khaled Rahmouni, a Meknes, whose home is near the mosque told the Reuters news agency: "About 300 worshippers gathered inside the mosque for the Friday afternoon mass prayers. When the imam was about to start his sermon, the minaret went down."

The lightly injured were hospitalised in Meknes while those with serious injuries were taken to Fes, 60km north of the town, state television station said.

Angry residents accused authorities of ignoring warnings about the dilapidated state of the mosque.

"We told them many times before that there were widening cracks on the walls and that its minaret had begun tipping over but they ignored the warning," one man, who gave his name only as Mohammed, was quoted by the Reuters news agency as saying.

Mohamed and other residents said they believed the accident could have been averted if the warnings had been heeded.

In the wake of the tragedy, the Moroccan government has announced they will double spending this year on rebuilding decaying mosques. They had already launched a plan in 2006 to repair or build 641 mosques, of which 87 are threatened by ruin, at a cost of 255 million dirhams. 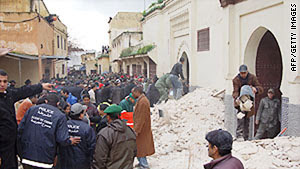 Judges are investigating why the minaret fell but Islamic affairs minister Ahmed Toufiq denied the government was responsible and blamed bad weather. "A crack appeared in the minaret wall in January and we dispatched an expert and her findings did not specify the need to shut the mosque down," he said. "The mosque needed restoration and we planned to do it but continuing rains prevented us from doing it before the disaster. So there is no human responsibility for that because there was no neglect of duty."

King Mohammed VI has also given instructions to conduct an urgent appraisal of all Morocco's old mosques. The country has over 50 000 mosques.

"I am deeply saddened by the tragic loss of life of people who had gathered to worship at the mosque. I extend to the families of the victims my deepest sympathy and that of the entire Organization," she said.

"As immediately indicated by His Majesty the King, this fatality will be responded to with a review of the condition of Morocco's ancient mosques. UNESCO supports the prompt measures taken by the Kingdom of Morocco to restore the damage and to prevent further risks in this and other sites, and offers its collaboration in the inventory and analysis of sites that have been planned," she added.

UNESCO adds they can international experts to help speed up the diagnostic process and is already in contact with the Moroccan Authorities to jointly define the initial and most urgent steps.

The medieval city of Meknes was founded in the 11th century by the Almoravids as a military settlement. It became a capital under Sultan Moulay Ismaïl (1672–1727), the founder of the Alawite dynasty. The sultan turned it into a impressive city in Spanish-Moorish style, surrounded by high walls with great doors, where the harmonious blending of the Islamic and European styles of the 17th century. UNESCO added it to the World Heritage List in 1996.