£15.7 million given out to repair 154 churches in England

English Heritage and the Heritage Lottery Fund (HLF) announced this week more than £15.7 million to support urgent repair work to 154 churches across England, including many dating back to the Middle Ages. The grants were awarded under the organisations’ joint Repair Grants for Places of Worship scheme.

Dr Simon Thurley, Chief Executive of English Heritage, said; “We are delighted with the continued success of this important national scheme which has helped to restore and preserve some of the country’s most historic places of worship.”

“Historic places of worship are at the heart of their communities. They give us beautiful public spaces where people can find peace or companionship, enjoy exhibitions and concerts or benefit from practical services such as post offices, shops, nurseries. We are thrilled to be working with the HLF to support over 150 of England’s most significant places of worship as they are repaired for the use of our generation and the enjoyment of our children and grandchildren.”

Carole Souter, Chief Executive of the Heritage Lottery Fund, said; “England’s places of worship are a key part of our heritage but largely rely on the hard work and generosity of local communities and volunteers to keep them in good order. This money will help support the passion and commitment of those communities and safeguard these precious and important buildings.”

£1.4m is being given to churches and chapels in Norfolk and north Suffolk to help fund repairs, church leaders called for local communities to support their historic buildings. Norfolk has more than 600 medieval churches - the highest concentration anywhere in the world.

Eleven Norfolk churches and two in north Suffolk are set to benefit from the latest round of grants. Norfolk Churches Trust secretary Malcolm Fisher said that while the latest grants will go a long way towards getting repair work under way at local churches, there is not enough cash available for all of the schemes which need it.

He said: “There is certainly not enough funding available for churches. It's a ridiculous situation where £10m a year comes from the government through English Heritage for church restoration across the whole country - Norfolk could easily swallow up that whole amount year on year.

“In this day and age, that amount of money is nothing. When substantial work needs doing on a medieval church, it is always going to cost an amount which is way beyond the ability of local fundraising.” 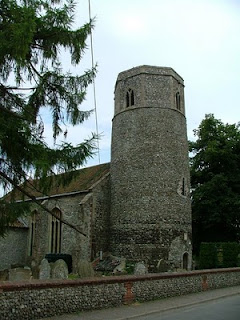 The medieval church of St Andrew in Great Ryburgh, near Fakenham, was awarded £129,000 and the Rev Robin Stapleford said that without such a grant, it would be nearly impossible to pay for the work.

“It is for quite routine roof and wall repairs, but in a medieval church like ours, which is nearly 700 years old, these problems do occur and they are costly.

“We have a church council of just seven or eight people who organise our fundraising, so without this type of funding it would be almost impossible for us to get such projects under way,” he said.

The Church of St Mary the Virgin in Sedgeford received £98,000. The building dates back as far as the end of the 12th century. There are several interesting features, including traces of early medieval wall paintings.

The oldest church in Warwickshire – St Peter’s Church in Wootton Wawen, near Stratford – received £48,000 to repair its tower, north wall and west gables.

Dating back to the early 11th century, the crumbling Saxon ruins are based in a parish of just 700 villagers. The funding forms part of an appeal for £100,000 to restore the distinctive “white” sandstone building structure.

Vicar Lawrence Mortimer, said: “The grant represents a significant percentage of the total and it’s great for such a small village. We will be applying to other agencies but a lot will have to be done locally by tapping into the enthusiasm of those who love the church and would hate to see it fall into disrepair.”

The East Midlands Church of St Martin of Tours in Bilborough will receive £107,000 which will help to address the urgent need for repairs to the tower roof structure and coverings, the parapet wall and other high level tower masonry.

“Without this grant the future of this church would have been unsure, the funds required for the restoration work were way beyond the resources of the local community. For over 500 years people of this community have worshipped in this church. It is set at the heart of the parish and community, and holds a special place in many people’s hearts.”