Scholar examines reports of solar eclipses in the Middle Ages 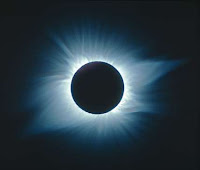 Hundreds of solar eclipses were recorded by medieval chroniclers, offering historians of astronomy with some vital information about how people in the Middle Ages reacted to this phenomenon.

The latest research into this subject has just been published in the Journal for the History of Astronomy. In his article, "Investigation of Medieval European Records of Solar Eclipses," F. Richard Stephenson states he wants to provide "an intriguing insight into the effects of solar eclipses over a wide range of magnitudes on largely untrained and unsuspecting observers."

Using chronicles mainly from England, France, Germany and Italy, Stephenson finds hundreds of accounts. His study, however, is limited to 418 reports of eclipses that were reported from some identifiable location, such as a town. This allowed him to use scientific calculations to know what type of solar eclipse occurred there.

The study finds a large variety of information reported from the chroniclers, with some offering interesting details. For example, one German chronicle reported in 1133, "on the 4th day before the Nones of August [Aug 2], the 4th day of the week, when the Sun was declining, towards the ninth hour the Sun in a single moment became as black as pitch and day was turned into night; very many stars were seen, objects on the ground appeared as they usually do at night..."

Other accounts happened to be less vivid. A report from the city of Cologne in 1232 stated, "A partial eclipse of the Sun was seen after midday in the same year; (it was) not, however, very notable.”

The article mainly deals with the chances of an eclipse being observed depending on its magnitude - the full eclipse and the stronger partial ones were far more likely to be seen than minor solar eclipses.

Stephenson also notes when the chroniclers report when stars could be seen during eclipses, and finds that this usually only happened during the strongest eclipses.

He notes how one chronicler reported that in, "1310, on the last day of January, at the 8th hour at Avignon, there was an eclipse of the Sun and it was unusually eclipsed, and was remarkably scintillating. There appeared just as at nightfall a single star, according to the opinion of the crowd." Stephenson believes that the star they saw on that date was actually the planet Venus.

Stephenson writes, "It is my hope that the above deductions based on the investigation of medieval European reports of solar eclipses may prove helpful in the study of the numerous allusions to solar eclipses in ancient Greek and Roman writings. For many of these events, the date of occurrence and interpretation are often problematical. The medieval observations indicate that only large eclipses would be likely to be noticed, while visibility of stars by day would suggest a very large eclipse indeed."

"Investigation of Medieval European Records of Solar Eclipses, " by F. Richard Stephenson appears in the Journal for the History of Astronomy, Volume 41, Number 1, (February 2010).