Medieval historians and archaeologists held a conference over the weekend to discuss the rediscovery of the battlefield of Bosworth, which saw a pitched battle in August 1485. The scholars met at the County Hall in Leicester, with live video of the conference being streamed over the internet.

The video of the conference can be accessed here.

Joe Ann Ricca, President of the Richard III Foundation, commented that the conference "provided a wealth of information and was one of the most exciting and thought provoking events to take place. Its importance for British history is paramount." 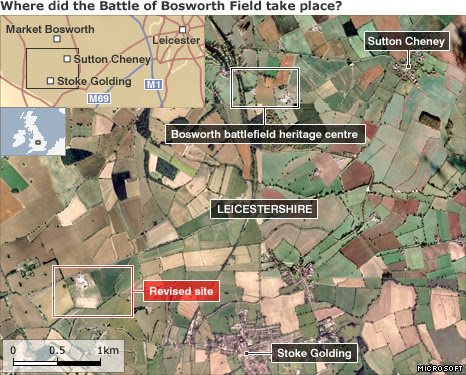 Dr Glenn Foard, who led the archaeological team that found the battlefield, presented a paper about how the site was discovered. Other prominent medieval military historians were also on hand - Anne Curry, Matthew Strickland, Robert Hardy, Derek Allsop and Steve Walton - with papers and commentary about various aspects of the battle.

Speaking to Medievalists.net, Steve Walton explained, "archaeological work over the last 2 years has uncovered nearly 30 lead roundshot from the Battle of Bosworth, both securely locating the battle 2km southwest of Ambion Hill along Fenn Lane, but also reorienting our understanding about the battle. While it was possible to find that artillery had been at the battle in a small number of the contemporary records, it had never been given much attention then or by modern authors. Now, with nearly three dozen roundshot ranging from 30-96mm in diameter staring at us, it forced artillery to the fore in the battle."

Walton adds that the paper he gave, Gunpowder weapons in the late 15th century & their battlefield use, "looked at what kind of artillery was common at the time that could have shot those munitions, as well as the scanty information on artillery in the Wars of the Roses and in the English arsenal. I ended with some very preliminary remarks on the performance and damage that guns of the time could have done -- leading again to the conclusion that artillery was incredibly powerful (as in, high energy), but since the 'blast radius' of each ball was so limited, the salvos fired at Bosworth were not likely 'decisive', though they did certainly shape how the battle evolved."

Anne Curry's presentation - The armies and the battle: the documentary evidence - looked at the half-dozen important accounts of the battle, as well as letters and government records, to see how their material can now be viewed with the new archaeological findings. Various issues that are now being addressed include the movement of various forces, the use of archers and artillery, and even the length of the battle.


Joe Ann Ricca notes that the research so far has only shown "the tip of the iceberg of much more that will be revealed." Several issues need to be examined, she adds: "I want to know where Richard’s strategic position was and what caused him to leave it. I have viewed the area for many years, and have seen the new location twice and to me, it all makes sense.

"But there is folkore and tradition that must be examined as well. What is the difference between the well that was in the village of Cheepy vs. the current one that is on the battlefield centre’s site. It is more modern than the one in Cheepy.

"We must examine the road system of that time, including where the Roman Road lay and what materials did it consist of? There is so much more to be examined, and while the work revealed at the conference was exciting, there is much more work that needs to be done."

This BBC report about the Bosworth Battlefield has been made available on Youtube:

Click here to see our early article: Exact Location of the Battle of Bosworth Revealed