Castle for Sale in Ireland

A medieval castle in Ireland has been put up for sale after financial problems forced its hotel business into liquidation.  Kilkea Castle in County Kildare, Ireland, was built in 1180 and remained in the hands of one family for over 700 years. It is now used as a hotel and golf course, and is particularly noted as a venue for hosting weddings. 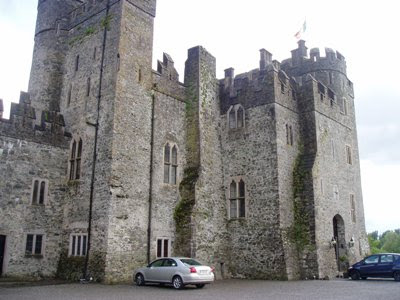 According to Irish media reports, the asking price for Kilkea Castle and its 145-acre estate is €16 million. Until recently, the property was being managed by Leoville Limited, who leased the property from an Irish-American owner for a yearly payment of €515,000. But declining revenues from a lack of tourism, as well as debts incurred from building an extra 33 lodges at their golf course, forced the company into liquidation late last year.

General manager John Kissane told the Irish Times that the castle handles about 120 weddings a year, earning between €20,000 to €25,000 for each event.

The Anglo-Norman lord Hugh de Lacey built a motte and bailey castle on this site in 1180. The castle went into the hands of Maurice FitzGerald, 3rd Lord of Offaly and Justiciar of Ireland, and remained in the hands of the FitzGerald family until the 1960s. 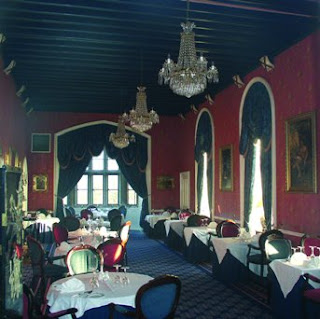 Lisney Property Management, who are selling the castle, describe it as "a beautiful and historic property that has stood proudly for over 800 years. It is one of the largest inhabited castles in Ireland with established hotel, golf and leisure facilities. The castle grounds provide a magnificent backdrop to the championship golf course and to the on-site modern 33 unit (99 bedroom) lodge development.

"The castle was established in 1180 by Hugh de Lacey and was once owned by the Geraldine dynasty. Kilkea Castle Hotel has 36 en-suite bedrooms, fine dining room, bar/lounge, banqueting facilities, on-site leisure centre with indoor heated swimming pool and gym. There is also a 27 bedroom staff building."

Click here for a brochure with more information about Kilkea Castle.

Click here to go to our section Castles for Sale