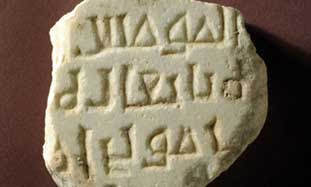 A 10th century Arabic inscription was discovered in excavations in a private house in the Jewish Quarter of Jerusalem, according to a statement released Wednesday by the Israel Antiques Authority.

The house is located north of the Crusader period Church of St Mary of the Germans. Part of the church’s foundations and the remains of a building, which dates to the time when the Ayyubids ruled the city after capturing it from the Crusaders (13th century CE), were uncovered in the excavation.

The inscription was found on a fragment of a marble plaque (20 x 20 cm) and consists of three engraved lines of square Arabic script that is characteristic of the first centuries of the Islamic period. Professor Moshe Sharon of the Hebrew University of Jerusalem deciphered the writing based on two similar inscriptions that were previously discovered in the country.

According to Professor Sharon, “The inscription that was found now, which dates to the year 910 CE, and other such inscriptions, commemorates the granting of an estate by the Abbasid caliph to one of his loyal followers in Jerusalem. We know from this type of official inscription that the caliph used to give land to his followers who were, for the most part, retired army veterans, and even exempted them from paying taxes for the receipt of the property”.

Annette Nagar, the excavation director on behalf of the Israel Antiquities Authority, who discovered the inscription, says, “The reign of the Abbasid caliph Al-Muqtadir (also known as “Emir of the Faithful”; 908-932 CE) was characterized by repeated wars for control over Israel with the Fatimids, who ruled Egypt,. The caliph probably granted estates as part of his effort to strengthen his hold over the territories within his control, including Jerusalem, just as other rulers did in different periods”. 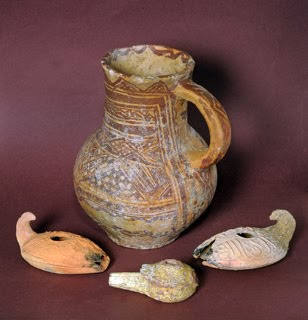 In addition to the inscription, numerous ceramic vessels, glass vessels and coins that range in date from the Second Temple period to the Middle Ages were discovered in the excavation. Noteworthy among the pottery are the oil lamps decorated with Arabic inscriptions that were found in the foundations of the Ayyubid structure and on its floor.

The house’s owner planned a renovation and — as required by law — brought archaeologists to carry out a salvage dig meant to prevent harm to valuable antiquities.

The finding will help scholars better understand 10th-century Jerusalem, populated by Muslims, Christians and Jews, and the methods used by Muslim rulers to solidify their control.