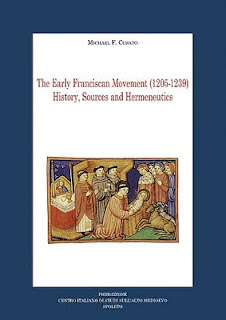 At the heart of the struggles and tensions within the early Franciscan movement, contending narratives vied with each other for a hearing and a following within medieval Franciscan history.

That struggle was essentially between two different visions of Franciscan life. The earlier minorite vision of Franciscan life was sensitive to and critical of the socio-economic realities operative in the Spoleto Valley at the turn of the 13th century; these friars desired to live with and be at the service of the minores of their time.

Another vision preferred a more institutionalized form of the charism, stressing the apostolic (and predominantly clerical) usefulness of the Franciscan order to Church and society through the excellence of its preaching, acuity of its learning and radicality of its asceticism. These two versions of the Franciscan charism, while complementary expressions of the vision of Francis, were not easily reconcilable or compatible with each other. Both represented spiritual visions; but the social formation and location of the friars from which each of these visions originated were not the same, thus conditioning their contrasting perspectives on the forma vitae and explaining at least some of the differences and resulting struggles.

This volume gathers together and updates previously published essays on topics related to the contested story of early Franciscan history (1205-1239), treating subjects such as the Franciscan approach to power and authority, the attitude of Francis toward Islam and the Crusades, the Privilege of Poverty, the connection between the two versions of the Epistola ad fideles, the relationship between the chartula and stigmata of Francis, the centrality of the Sacrum commercium, and the fall from grace of Elias of Cortona.