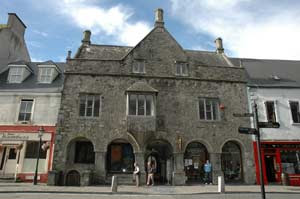 Rothe House, a historical home in the Irish town of Kilkenny, revealed last week that archaeologists have discovered medieval finds dating back to the 14th and 15th century. This was during a period that property was owned by the Abbot of Duiske Abbey, a Cistercian monastery located by the river Barrow at Graiguenamanagh, some 30km (20 miles) away.

A local firm, Kilkenny Archaeology, has been digging through the house's grounds and uncovered a waste pit or garderobe. Archaeologist Cóilín Ó Drisceoil, who led the team, told the Irish Times “the garderobe was the medieval equivalent of a luxury jacks” and the significance of the “quite rare discovery” was that “it provides an important insight into how a medieval abbot lived”.

Among the finds made by the team were bones from swans and various choice cuts of beef; fragments of pottery wine jugs imported from Bordeaux; and “an intact stool” in which a fruit stone – possibly apricot – is embedded.

Róisín McQuillan, manager of Rothe House, said the dig has confirmed that successive abbots “enjoyed the high life in the city while the rest of the monks lived a simple, ascetic existence at the abbey”.

The archaeologists also found animal bone remains, medieval roof tiles and what looks like a buckle from a horse’s bridle.

The medieval town house and the abbey were confiscated by the state when Henry VIII dissolved the monasteries in Ireland under legislation introduced in 1537.

The Kilkenny site was then acquired by the wealthy Rothe family who built a lavish residence consisting of three Elizabethan-style cut-stone houses. Rothe House has been restored and is today a major tourist heritage attraction. Click here to go to the Rothe House website.