Medieval researchers in Spain have discovered a copy of the Qur'an dating back to the thirteenth century, the second oldest manuscript of this kind found in that country.

On the occasion of the tenth anniversary of the Fundación Tres Culturas del Mediterráneo, José Antonio Griñán, president of the Junta de Andalucía, presented a facsimile edition of a 13th century Andalusian Qur'an at the National Library of the Kingdom of Morocco. 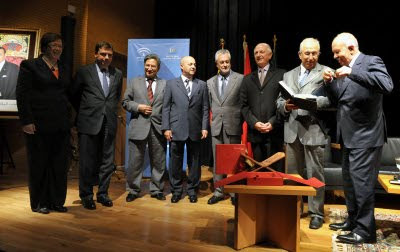 The copy was recovered fortuitously in the town of Cútar (Malaga), and its original has been studied, restored and edited by an agreement between the Ministries of Culture and Public Works and Transport of the Junta de Andalucía and the Fundación Tres Culturas del Mediterráneo, in collaboration with the University of Granada. This institution has been responsible for carrying out the technical direction of restoration works and material characterization.

The restoration work of the Qur’an was directed by doctor Teresa Espejo Arias, from the Department of Painting at the University of Granada.

Additional studies have been performed by doctors Teresa Espejo Arias, from the University of Granada, and Juan Pablo Arias Torres, from the University of Malaga, regarding contents, material characterization and codicological analysis of the manuscript. These studies are part of a research project conducted at the University of Granada by the departments of Analytical Chemistry and Forensic Medicine from this University, together with the Institute for Materials Science (CSIC). In fact, they have implemented protocols for characterization and analysis techniques developed within the research team.

The results obtained provide the knowledge necessary to locate this copy around the thirteenth century, and most likely, within the geographical area that was once the Nasri kingdom of Granada. Conclusions emerging from this research put this document as one of the two oldest copies of Qur’an preserved in Spain, along with the 1397 manuscript preserved in the Royal Library at El Escorial. Furthermore, they include it among the select group of parchment Qur’ans from 12th and 13th centuries known in the world.