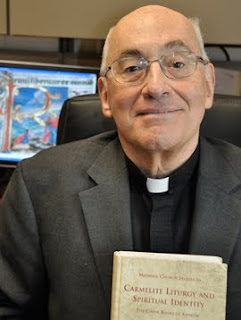 Father James Boyce, an important scholar of medieval liturgy and music, has passed away after an illness. He was 60 years old. He was the chair of the Department of Music and Art History and a professor of music at Fordham University.

Father Boyce began his career at Fordham as an assistant professor of music in 1985 after earning his doctorate in musicology from New York University. He rose to associate professor, and became chair of the department in 2006. Recently he was named full professor.

He was a member of the Carmelite Order and a priest at Our Lady of Mt. Carmel Church in Tenafly, N.J.

Father Boyce’s area of expertise was the study of Medieval Latin liturgy and the Carmelite liturgical tradition, from historical, legislative and spiritual perspectives. Most recently, Father Boyce published Carmelite Liturgy and Spiritual Identity: The Choir Books of Kraków

, a 500-page book, on Carmelite choir books that he discovered in a small Kraków convent.

Last September we published a news article about the book, which involved sevral years of research in Poland. Father Boyce said, “It was a voyage of discovery I really had no clue what I would find. People had said the books were all 18th century. But when I saw the work, I gasped. These books—the earliest ones—were 600 years old. Now that’s old, even for our order. It was then I realized how valuable they were.”

“Fordham has lost a multitude in Father Boyce,” said Joseph M. McShane, S.J., president of the University. “Not just a scholar of music, he was an accomplished musician himself, a generous mentor and teacher of music, and a genial colleague. The University, the church and the world of musical scholarship are all poorer today. He will be missed greatly by the Fordham family and by his Carmelite brethren.”

Michael E. Latham, Ph.D., interim dean of Fordham College at Rose Hill, recalled Father Boyce not just as a scholar who attained a national and international reputation, but as the kind of person who taught extra class sections to support the work of his junior colleagues.

“A dedicated, compassionate teacher, he was a leader in his department,” Latham said. “He was, in all respects a wonderful, caring devoted colleague.”

Click here to see our article about his book Carmelite Liturgy and Spiritual Identity: The Choir Books of Kraków.