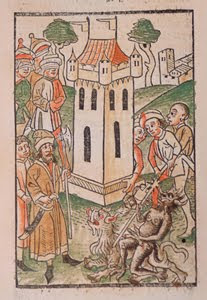 The University of Otago in New Zealand has published online samples of 38 books it owns that were printed before 1501, in a bid to promote greater interest in them.

The medieval books are mostly religious texts in European languages, handbound and handprinted on handmade paper, and illustrated with woodcuts.

Special Collections Librarian Donald Kerr hopes the samples on the university's website will encourage more scholarly use of the books.

“These books don’t get their fair share of attention,” says Dr Kerr. “Everybody looks to the illuminated manuscripts because they are seen as ‘sexy’.

“The project came about when I decided to update the old 1966 census of holdings of pre-1501 printed books held in Australasian libraries. Over the years, holdings have changed and some are not catalogued. Others have very poor or skimpy descriptions. It definitely needed doing again. The new Census has generated new activity in the Inkie world with colleagues in Australia and New Zealand cooperating to beef up the information. We’ve also had a lot of interest from overseas, including the British Library and the State Library of Berlin. They tend to forget that there are old books held over here, too.”

Dr Kerr says the oldest book in the collection was printed in 1472, less than 20 years after the first printing press was invented.

There is one highly unusual English sample: four binding fragments printed by William Caxton, and John Lettou, about 1480 and bound in a 1481 edition of Nicolas de Lyra’s Commentaria in bibliam. There is a selection of printers, ranging from Johann Amerbach, Peter Drach, Ulrich Han, and Georg Husner to Anton Koberger, Aldus Manuitus, Johann Mentelin, and Johannes Trechsel.

Operating from European towns such as Basel, Speyer, Rome, Strassburg, Nuremberg, Venice, Strassburg, and Lyon, their productions reflect their expertise and resources in this burgeoning industry. Typefaces, style, and quality of printing and bookmaking also vary.