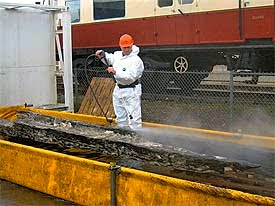 Medieval bridge timbers found in Leicestershire are being preserved, thanks to sugar.

British Sugar has supplied more than 40 tonnes of liquid sugar to Leicestershire County Council, free of charge, to preserve an 11th century bridge discovered in Hemington.
.
Once restoration is complete, the timbers – part of the largest medieval wooden structure in the region, after Lincoln Cathedral’s roof – could be put on display.
Timbers from three medieval bridges were found in Hemington Quarry in 1993 by a retired local GP, the late Chris Salisbury.

The County Council funded the University of Leicester Archaeological Services team to study and excavate the site. Sections of the 11th century bridge were so large that they had to be lifted by eight people.
Since the wet timbers were removed from the site, a painstaking conservation process has been taking place at Snibston Discovery Park, which involves immersing them in tanks of liquid sugar. The sugar crystals gradually replace the water and prevent the wood from warping.

Dr Julian Cooper, head of food science at British Sugar, said: “This project has been a source of genuine pride for British Sugar. Our long association with the River Trent at Newark made it a privilege to be involved in the restoration of the Hemington Bridge, which once spanned the same river.
"Now we have reached the final stages of this 15 year conservation process, we congratulate the determination of those involved in safeguarding the bridge for generations to come.”
The bridge sections are thought to have been part of The King's Highway, a major national route linking London and the South with Derby and the North. They have gone on show at local science hub the Snibston Discovery Museum, where they had been kept in drying chambers for three years in the final part of the project.

"The carpentry and architecture of the 11th century bridge represents a crucial moment in British building history,” said Site Director Susan Ripper. “It combines the earth-based building technology of Anglo-Saxon England with the timber-frame technology which became commonplace a century later."

Results of an investigation into the bridges' structure and historical context have been revealed in an accompanying book launched alongside the display.

"The timbers are a rare testament to the engineering skills of the early Medieval period and illustrate the importance of the road networks to the economy of the time," said the University's Lynden Cooper. "They also provide unique evidence of Saxo-Norman woodworking methods."

Ernie White, Cabinet member for Community Services, said, “It’s amazing to think that timbers from a Norman bridge are being preserved with sugar - and that they could eventually be displayed to the public. I’d like to thank British Sugar for their generosity in supporting this project and for helping to ensure that future generations will be able to learn more about this fascinating find.”