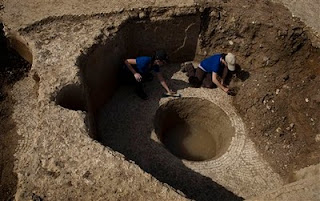 One of the largest wine presses ever revealed in an archaeological excavation in the country, which was used to produce wine in the Late Byzantine period (sixth-seventh centuries AD), was recently exposed in excavations conducted by the Israel Antiquities Authority.

The impressive wine press is 1,400 years old and measures 6.5 x 16.5 meters. It was discovered southwest of Kibbutz Hafetz-Haim and was partly damaged during the installation of the infrastructure there.

According to Uzi Ad, excavation director on behalf of the Israel Antiquities Authority, "What we have here seems to be an industrial and crafts area of a settlement from the sixth-seventh century CE, which was situated in the middle of an agricultural region. The size of the wine press attests to the fact that the quantity of wine that was produced in it was exceptionally large, and was not meant for local consumption. Instead it was intended for export, probably to Egypt, which was a major export market at the time, or to Europe. An identical wine press was previously exposed north of Ashkelon, about 20 kilometers from the wine press that was just found in Nahal Soreq and we can assume that the two installations were built by the same craftsman." 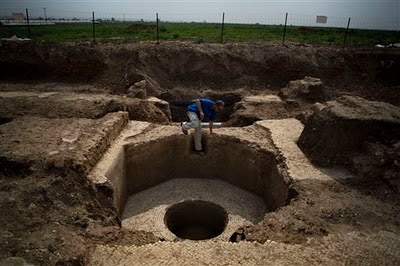 Ad adds that "The wine press' collecting vats were neither circular nor square as was the custom, but octagonal. And since this method of construction is far from being practical because sediment would accumulate in the corners of the vats, it seems that they were built in this manner for primarily aesthetic reasons."

Ad says, "This is a complex wine press that reflects a very high level of technology for this period, which was acquired and improved on from generation to generation." The wine press originally measured 15.0 x 16.5 meters and included a central treading floor with a mosaic pavement where the grapes would be trod on. The must that was produced from the grapes would flow from the treading floor to a distributing vat that was originally elliptical and had a mosaic pavement. The must was directed by way of a hole from this vat to one of the two collecting vats located on either side. The must would remain in the collecting vats for a period of three to five days during which different ingredients were added to cause it to ferment and become wine. A round sump that was used for collecting the waste grape sediment was exposed in the middle of the mosaic pavement in the two collecting vats.

Rectangular surfaces were also discovered around the treading floor. These too were originally paved with a mosaic floor and were connected to the treading floor by way of a hole in the wall they shared with it. The grapes were probably placed on these surfaces before being trod on, and sometimes the initial fermentation process of the grapes would begin.