Nearly 150 early printed books in the Yale Law Library have bindings that incorporate visible pieces of medieval manuscript. A number of these books are featured in the latest exhibit from the Law Library's Rare Book Collection, "Reused, Rebound, Recovered: Medieval Manuscript Fragments in Law Book Bindings." The exhibit is on display through May 2010 in the Law Library.

In 15th- and 16th-century Europe, recycling was second nature. Bookbinders, for their part, cut apart discarded medieval manuscripts and reused the strong, flexible and expensive parchment in their bindings. These scraps reveal information about the distribution and popularity of medieval texts, the evolution of scripts, and the history of printing and binding. A precious few of them preserve the only surviving fragments of long-lost texts. 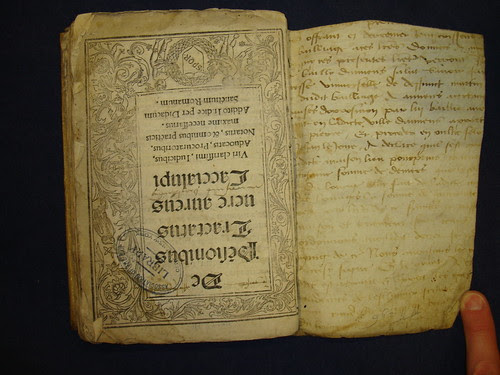 The exhibit reflects the diversity of medieval material in the Law Library's bindings. The Bible and liturgical manuscripts are well represented, some with early forms of musical notation. Four of the law books contain legal texts in their bindings. Other examples include a sermon, a fragment of Cicero, and two Hebrew manuscripts. One of the fragments is the oldest item in the Law Library's collection, dating from around 975-1075.

While most of the fragments are identified and tentatively dated, a couple remain mysteries. The exhibit coincides with the annual meeting of the Medieval Academy of America, March 18-20 at Yale University. Conference attendees will be invited to try their hand at identifying the fragments. 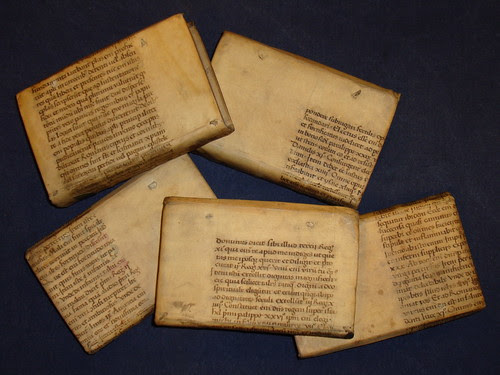 The exhibit was curated by Benjamin Yousey-Hindes, a Ph.D. candidate at Stanford University, and Mike Widener, Rare Book Librarian at the Lillian Goldman Law Library.