Technology fit for a King

It is a discovery that has captivated the nation and been dubbed by some as the UK’s most important archaeological find ever. Had the remains of the last King of England to be slain in battle really been found buried under a council car park in the centre of Leicester?

Earlier this year the University of Leicester announced to the world’s media that the skeleton unearthed by its team of archaeologists was that of Richard III, whose final resting place had remained hidden for hundreds of years. In a unique project working with colleagues at Leicester, Loughborough University’s 3D printing experts are creating a replica of the King’s skeleton.

Although he only ruled for two years – from 1483 to 1485 –  Richard III stands out among his peers as one of the most famous, or infamous, Kings of England.

On 22 August 1485 he was killed at the Battle of Bosworth, bringing to an end both the Plantagenet dynasty and the Wars of the Roses. His body, stripped and despoiled, was brought to Leicester where he was buried in the church of the Franciscan Friary, known as the Grey Friars. Over time the exact whereabouts of the Grey Friars became lost.

Click here to read the rest of the story from The View: Loughborough University

Email ThisBlogThis!Share to TwitterShare to FacebookShare to Pinterest
Labels: Archaeology

Boat, oyster shells, coins and an Anglo-Saxon gravestone - what has been found from the Middle Ages 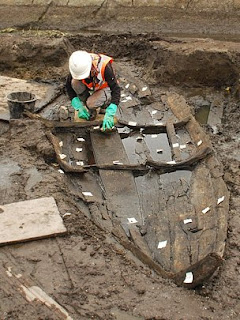 Some recent news on what medieval items people are finding in England and Wales...

Archaeologists working in Norfolk have discovered the remains of a boat which could be as much as 600 years old. The boat was found along the River Chet near Loddon, with some of its wooden timbers, iron and copper alloy nails. The vessel would originally have been about six metres long and would have had a sail.

This is the first time that a medieval vessel has been discovered in Norfolk, according to site archaeologist Heather Wallis. She explains, "We think it dates between 1400 and 1600 AD and is very well preserved. It might have been used for carrying lighter good on the river."

Click here to read reports from the BBC, Beccles and Bungay Journal and Eastern Daily Press.

A group of amateur archaeologists are working in Northampton, where they are doing digs to find remains of the town's medieval castle. John Duthie, one of the organizers of the dig, said in their last search, “We actually found a piece of the castle - a large piece of sandstone. We also found oyster shells and pieces of pottery which look to be medieval. They’re now being checked over by a professional archaeologist and we’re really delighted with the finds. For only a small dig, we found a great deal.”

The group of amateur archaeologists do digs of one-square metre around the site of the former castle, which was torn down in the 19th century so the land could be used for the town's railway station.

You can read more from the Northampton Chronicle and Echo.

The next two articles are a little odd. First, when Ifor Edwards dropped his keys somewhere on his farm near the Welsh village of Bronington, he called in spme metal-detecting experts from the Wrexham Heritage Society to help find them.

Not only did they find the keys, but also 14 coins dating from the later Middle Ages. Mr. Edwards told the Shropshire Star, “It is a once in a lifetime thing. It is such a shock, you just can’t quite believe it. You realize those coins were there before they ever found America or anything. You just can’t believe you’re holding something that is 600 and something years old. We only bought the land three years ago and nothing like this has ever been found before.”

You can read more from the Shropshire Star. 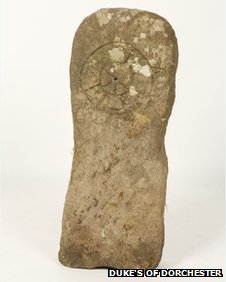 An even bigger discovery was made in a garage in Surrey - an auctioneer clearing out a house stumbled across a ninth-century gravestone. The 1,100-year-old stone is carved with Christian symbols, including an early Christian Celtic-form cross enclosed by a halo, with a panel of geometric carving below.

Guy Schwinge from the auctioneering house Duke's of Dorchester, told the Daily Mail, "Our valuer spotted the grave marker at the back of the garage, partially obscured by cardboard boxes and garden tools. To the untrained eye the gravestone appears insignificant, but closer examination of the carved decoration and detailed research has enabled experts to identify the object as an Anglo-Saxon grave marker, which probably dates from the time of Alfred the Great."

The gravestone has been sold at auction for £4,300. Click here to read more from the Daily Mail.