Archaeological discoveries in the church of Our Lady in Kotłowo

The first ever archaeological excavations in the Polish church of Our Lady in Kotłowo, in southwestern Poland, have led to the discovery of a unique Romanesque crypt, from the second half of the 12th century, as well as a vast number of coins and a few tombs.

The church in Kotłowo was built by at least the second half of the 12th century, and the Polish chronicler Jan Długosz claimed it was built in 1108. The biggest reconstruction in the history of the church took place in 1907. The aim of the reconstruction was to make the church bigger, by dismantling the eastern part of the building. 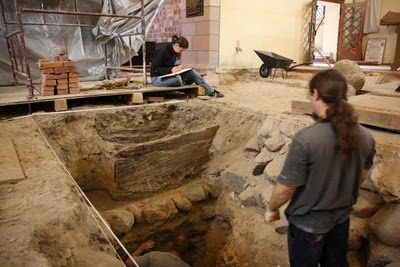 Prof. Marian Sokołowski, a conservator and a historian of art, from the Jagiellonian University in Kraków, came to Kotłowo before the reconstruction work started, and made a precise sketch of the Romanesque church. The aim of the current excavations was to verify his observations.

The current works, ordered by the Regional Monument Protection conservator, were led by Dr. Artur Różański, who has recently finished the excavations with a team of archaeologists from the Prehistory Institute of the Adam Mickiewicz University in Poznań. One of the archaeologists aims was to find the altar stone. Unfortunately many reconstructions of the church ruined it.

Scientists established that the first church built here had a crypt, located under the elevated altar. “It is one of a few 12th century crypts discovered in Poland” – says Różański.

The crypt existed until the 17th century, when it was filled in during a reconstruction of the church. The church undergrounds were under the whole eastern side of the church, under the presbytery and apse.