Saints, Sinners and Storytellers: Exhibition at the University of Nottingham 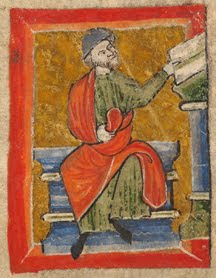 A treasure trove of medieval manuscripts from a rarely-seen and much-prized East Midlands collection goes on show this month at the University of Nottingham’s Lakeside Arts Centre.

The exhibition, ‘Saints, Sinners and Storytellers’ will showcase a selection of some of the manuscript books which were part of a large private library at Wollaton Hall in Nottingham, built up by its owners, the Willoughby family, during the middle ages. The items on show from Friday April 30 at Lakeside’s Weston Gallery give a rare insight into the literary tastes and religious beliefs of our medieval ancestors. Visitors will be treated to a colourful and fascinating glimpse of part of this historically important regional collection.

The principal volumes and items in the exhibition are the subject of an ongoing Heritage Lottery Fund project to conserve and catalogue 10 works from the Wollaton Library Collection. Staff at the University’s Department of Manuscripts and Special Collections have been engaged in a range of activities to enable the volumes to be displayed together for the first time. A web resource on the theme of medieval women will also be launched and digital copies of the key texts will eventually widen research access to the fragile manuscripts.

Among the fascinating exhibits is a wonderful French manuscript dating from about 1200, now believed to be the earliest illustrated manuscript of romances anywhere in the world. The book is a collection of seven French romances and 10 fabliaux (bawdy comedies), delicately illustrated with 83 miniatures; the volume includes the unique copy of Le Roman de Silence by Heldris de Cornuälle. It tells the story of Silence, the only daughter of the King of Cornwall who is brought up as a boy because the King of England denies women the right to inherit property.

Stories by a contemporary of Geoffrey Chaucer also appear in the exhibition. John Gower’s Confessio Amantis (Confession of a Lover) is a series of tales, written in about 1390, illustrating the ‘sins against love’, such as jealously and hypocrisy. This manuscript was owned by Henry Willoughby who died in 1528 and whose tomb, with his four wives, lies in Wollaton Church. On some of the pages pen sketches of leaves and animals have been added in ink to cover blemishes in the parchment.

Another exhibit which illustrates the move of medieval literature away from Latin to native languages is a single precious leaf from the English life of St Zita of Lucca, the Italian patron saint of housewives and lost keys! Dating from around 1475, no other fragment or copy of the medieval English translation of the story has ever been found. Zita was the faithful servant of a Tuscan family in the 13th century whose piety led the family to a religious awakening. Although not canonised until later, she became the object of a cult in the East Midlands and East Anglia in the later middle ages. A 15th century alabaster figure of her from Nottingham’s Castle Museum will also be on show.

The huge and magnificent Wollaton Antiphonal is a further highlight of the exhibition. This is a beautiful and highly-decorated medieval service book which St Leonard’s Parish Church in Wollaton has placed in the care of the University. Leaves from it will be on show for the first time since conservation work began in 2001. Enlarged digital images show the extent and quality of the decoration, revealing details which are otherwise difficult to see.

The Antiphonal was made in about 1430 for Sir Thomas Chaworth of Wiverton, the richest man in Nottinghamshire. When he died in 1459 it was bought for the use of Wollaton Parish Church but was taken into Wollaton Hall library for safekeeping at the time of the Reformation when many such service books were destroyed. It was returned to the Church in 1924 when the family sold the Hall. A special concert of some of the Latin chant from the Antiphonal, performed by the Binchois Consort, is being held at the Djanogly Recital Hall at Lakeside on Saturday May 8.

Keeper of the University’s Manuscripts and Special Collections, Dr Dorothy Johnston said: “This exhibition is central to our Heritage Lottery Fund project on the Wollaton manuscripts. We are delighted to have the opportunity to share the knowledge that we have gained about these volumes during the process of their study and conservation. It’s unusual to have medieval books that retain so much of their early history. The skill and artistry that went into their production is clear and, although they are now fragile and challenging to display, they provide a wonderful introduction to the medieval world.”

Thorlac Turville-Petre, Professor of Medieval English Literature from the Department of English Studies, is carrying out a wider research project on the Wollaton Manuscripts, funded by a grant from the Arts and Humanities Research Council. This will culminate in the publication of a book later this year as well as the development of web-based resources. He said:

“The opportunity to study these wonderful manuscripts and to relate them to the history of the Willoughby family has been a tremendous privilege. We have learnt so much about the manuscripts themselves and the context of medieval culture in the East Midlands”.

To accompany the Saints, Sinners and Storytellers exhibition, a series of talks and events is being held.

More details can be found on the Lakeside Arts Centre’s website.