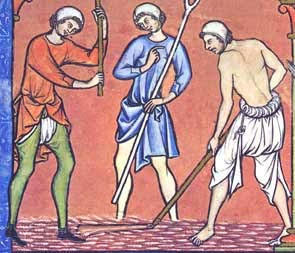 A topic that so far has received little attention from historians gets its moment in the open tomorrow when Binghampton University hosts a one day conference on Underpinnings: The Evolution of Underwear from the Middle Ages through Early Modernity. The conference, organized by the undergraduate students of the Center for Medieval and Renaissance Studies and the Medieval Studies Club, will feature seven speakers who will look at various aspects of undergarments from the medieval to the early modern periods.

The broad scope of the conference is described by organizers as: "From the trailing sleeves and towering headdresses of the High Middle Ages to the ornate, jewel-encrusted ensembles of Elizabethan England and the elaborate turbans of the Mamluk and Ottoman empires, clothing and headgear have captured the imagination of historians for decades. Few, however, have given thought to what lies beneath, which, even while having a functional role, comprises a system of sartorial signs that tell much with respect to social mores and shifting views of the body.

"This conference aims to explore the evolution of undergarments from the Middle Ages through the early modern era in a variety of contexts, from the material forms of the garments themselves to their symbolic associations and latent meaning."

Among the speakers will be Kristen Stewart of The Metropolitan Museum of Art, who will discuss “His and Hers: What can underwear tell us about evolving concepts of gender between 500 and 1750 AD”. Hattie Presnell of High Point University will give a paper on “Expanding a Nation: The evolution of farthingales during the reign of the Tudors”, while Carole Frick of Southern Illinois University will tackle the is“Under-Over-Under: the curious case of codpieces”

The conference takes place on April 24th, from 1:00 to 5:00 pm. The lectures will be followed by an exhibit and dinner. For more information about the conference, go to http://www2.binghamton.edu/cemers/conferences/Underpinnings.html