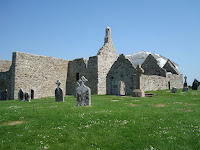 The Irish government has nominated several historical landmarks, including medieval sites, to be included as part of the World Heritage List. Being included as part of this list, which is administered by UNESCO, is expected to bring more tourism and support for conversation to these sites.

John Gormley, Minister for the Environment, Heritage and Local Government, made the announcement today, which includes several medieval monastaries and fortifications, as well as prehistoric and early modern sites. The new Tentative List has been submitted to UNESCO with a view to presentation to the World Heritage Committee meeting scheduled to take place from 25 July - 3 August 2010 in Brasilia.

In announcing the new Tentative List, Minister Gormley indicated that he is satisfied that “the new List comprises those properties which are of outstanding universal value, meet the UNESCO World Heritage inscription criteria in terms of integrity and authenticity and have the best potential for future inscription on the World Heritage List”.

He said he was delighted to present the new Tentative List which encapsulated the rich heritage and culture of Ireland.Minister Gormley also stated that Ireland has long recognised the importance of preserving diverse natural and cultural heritage. “Our heritage properties are our legacy not just in Ireland but globally” he said. 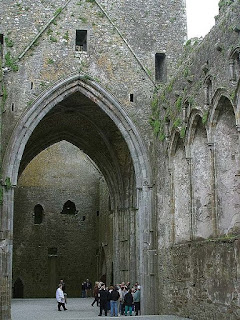 The Minister acknowledged the work of the Expert Advisory Group under the chairmanship of Lord Donald Hankey, which the Minister had established to review the Tentative List. He also thanked those who had made submissions, facilitated presentations to local authorities and attended public information evenings during the Tentative List compilation and consultation process.

The Minister re-emphasised that “the nomination of any property, from the new Tentative List, for inscription on the World Heritage List will only take place after consultation with relevant stakeholders and interested parties. It is envisaged that such consultation will take place through a partnership established for each proposed nomination.”

“Inclusion on the Tentative list is a particular badge of honour. We must remember our unique culture and heritage is one of our most valuable assets which deserves to be shared internationally. Inscription on the World Heritage List allows us to showcase this asset. Inscription can also have its own reward and this can be by way of increased tourist numbers and the financial spin-offs associated with this,” the Minister concluded.

The medieval sites nominated are:

The Monastic City of Clonmacnoise and its Cultural Landscape: located in Counties Offaly, Roscommon and Westmeath in the centre of Ireland. It is an outstanding example of a relict early medieval Insular monastic city unobscured by modern building development. It is set within a superlative semi-natural landscape that deepens it spiritual qualities, adding greatly to its authenticity and integrity. The interaction between man and the natural environment in Clonmacnoise is of unique universal value. The architectural ensemble at Clonmacnoise represents an outstanding example of an early medieval Insular monastic city. It represents a significant stage in the development of early medieval Christianity in the North Atlantic Region. Archaeological excavation coupled with exceptional documentary sources has demonstrated that Clonmacnoise was a civitas in reality as well as in name, unlike many other Irish sites, and, moreover, its dates are relatively early in the chronology of urban development outside the boundaries of the old Roman Empire. It is therefore highly significant to our understanding of the development of urbanism generally in Atlantic Europe, as well as clarifying non-Viking urbanisation in an Irish context.

Early Medieval Monastic Sites (Clonmacnoise, Durrow, Glendalough, Inis Cealtra, Kells and Monasterboice): The sites are a representative sample of Early Medieval Monastic sites in Ireland, which embody the Celtic Church’s rich cultural and historical past, playing a crucial role in Europe’s educational and artistic development. The six Early Medieval Monastic Sites chosen are the epitome of the Early Medieval Monastic Cities which derived their unique settlement patterns from the major sites of pre-Christian Celtic Ireland which themselves developed over the several centuries of the Iron Age. During these first centuries of the first millennium AD Britain and Western Europe fell into the orbit of the Roman Empire and the Christian Church, influences which Ireland largely escaped until the 5th century. The properties nominated are exemplars of centres of Celtic learning, teaching and enlightenment. The cultural tradition was unique and for a time the Irish monks were the only educators in Europe where these centuries are called the Dark Ages. For Ireland it was the Golden Age, as her missionaries kept the flame of knowledge and learning alive.

The Royal Sites of Ireland (Cashel, Dún Ailinne, Hill of Uisneach, Rathcroghan Complex and Tara Complex): The Royal Sites represent unique expressions of Irish society as places of royal inauguration, ceremony and assembly, representing each of the five provinces of Ancient Ireland. The sites are also significant as symbols of indigenous Irish culture and identity directly associated with politics and power in Ireland through the ages, stretching from pre-colonial kingship to early political mobilisation in the 20th century. The myths, legends and folklore associated with the sites are also indicative of their role in the early indigenous belief systems of Ireland and in the transition to Christianity. As such, the sites also illustrate spiritual responses reflected in the transition from Irish Paganism to Christianity. The sites illustrate creative responses and continuity, through the array of monuments ranging from Neolithic and Bronze Age tumuli, ring-barrows, ring-forts and sacred sites to Christian architecture and cultural landscapes. Situated on strategic and elevated locations, the Royal Sites are organically evolved relict cultural landscapes where the pre-Christian kingship in Ireland evolved and ended.

Western Stone Forts: The Western Stone Forts, comprising the Aran Islands, County Galway Group of 7 Forts, Cahercommaun, the Burren County Clare, Caherconree and Benagh, Dingle Peninsula and Staigue, Iveragh Peninsula, County Kerry, represent the penultimate use of a distinctive settlement form i.e. the drystone, generally circular, enclosure, a class of monument that was widely used by the maritime communities of the north Atlantic seaboard of Western Europe, throughout much of later prehistory. Western Stone Forts represent the apogee of the ringfort class of monument (an enclosed farmstead occupied by an extended kin group). The distribution, character, and hierarchy of forms of ringforts provide a mirror of the organisation, economy and polity of Irish society at a particular period (AD 700-1000). Western Stone Forts constitute an impressive corpus of vernacular architecture and represent a creative human response to the stony environment of western Ireland. Although separated in time and place from other stone fort / roundhouse traditions of Atlantic Europe, the Irish forts, nonetheless incorporate elements of an architectural repertoire peculiar to that region, in particular the chevaux de frise feature, murus duplex method of wall construction, and intra-mural features. The landscape setting of these forts testifies to a way of life (tribal pastoralist) that disappeared in Ireland, and across most of Western Europe, at the beginning of the second millennium AD, to be replaced subsequently by the feudal lordships of the medieval era.

Other sites nominated include:

The Historic City of Dublin

There are currently three World Heritage Sites in Ireland: Skellig Michael, off the Kerry coast; Brú na Bóinne in County Meath; and the Giant’s Causeway in County Antrim