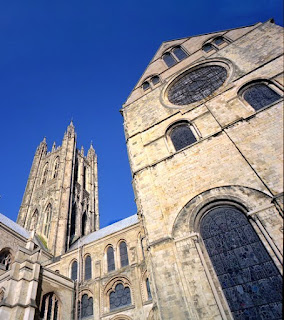 A unique collaboration between the University of Kent, Canterbury Cathedral Archives and researchers in Rouen has laid the foundations for a new and exciting project through which Canterbury residents and visitors may in the future gain easy access to some of the older and/or more fragile documents held in the Cathedral Archives.

Known as DocExplore, the project aims to develop an interactive system which allows digitised versions of valuable historical documents to be explored via a touch-screen, simulating, as far as possible, the experience of accessing the physical object itself. But users can see much more than the document – they can access translations and transcriptions, read more about the period in which it was written, its contents and who would have used it at the time by using the additional text, image, sound and video resources that are a feature of the system.

DocExplore will also capture the knowledge and expertise of the Archives’ staff by allowing them to easily present any available digitised document.

If the second phase of this EU INTERREG IVA-funded project is agreed, DocExplore will ultimately offer manuscript readers an even wider variety of tools, invaluable for both for the casual visitor with an interest in researching these priceless documents, and for academic historians and literary scholars.

For example, there will be tools to help readers to clarify annotations and to recover sections of the text which are damaged. It will also enable researchers to identify and compare writing samples from different writers and to investigate the nature of the paper on which documents are written.

The system was developed by Dr Richard Guest, Professor Michael Fairhurst and Dr Yiqing Liang from the School of Engineering and Digital Arts (EDA) at the University of Kent; Dr Catherine Richardson from the University’s Centre for Medieval and Early Modern Studies; Dr Malcolm Mercer and Dr Mark Bateson from Canterbury Cathedral Archives; and a team of researchers from the University of Rouen and the Bibliothéque de Rouen Archives.

Dr Yiqing Liang, the EDA-based researcher developing the system software, said: "The scoping phase of DocExplore began in April 2009. However, on the 17 and 18 March this year, local residents were given the opportunity to preview the ideas underpinning the proposed system at a two-day exhibition of the beautiful seventeenth century Travel Diary of John Bargrave held in the Cathedral’s archives. This exhibition and the feedback we received helped us learn a great deal more about how to build on the basic concept and will be useful for when we move on to the implementation of the ultimate system in the next phase of the project."

Dr Liang was also encouraged to see such a high level of interest in the project from those who visited the exhibition. "Canterbury Cathedral Archives continues a tradition of record-keeping that dates back at least 1300 years," she said. "We are proud and excited to be part of such an important tradition."