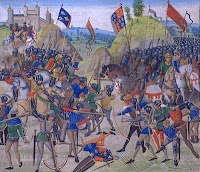 A unique website showcasing virtual manuscripts chronicling the Hundred Years´ War was launched online this month thanks to the work of academics from the universities of Sheffield and Liverpool.

The website, which was funded by the Arts and Humanities Research Council (AHRC) will offer more than 100 transcriptions from the renowned Chronicles of Jehan Froissart, which provide a unique account of the epic battle between the English and the French.

Emeritus Professor Peter Ainsworth, from the University of Sheffield´s Department of French directed the `Online Froissart´ website which provides essays, commentaries and notes on the history, politics and personalities of the 14th century, plus a powerful collation tool and search engine.

In his celebrated Chronicles, Jehan Froissart (1337-1404) provided a lively account of the Hundred Years´ War between the French and English. The work is a major source of information on the conflict and still holds great interest for historians, giving a unique insight into the realities of warfare in 14th-century Europe. 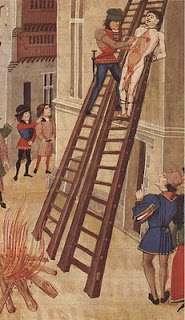 His aim was to record as impartially as possible the military achievements on either side during this prolonged conflict. The Chronicles cover the years 1325-1399, and Froissart worked on them throughout his adult life.

Professor Ainsworth said: "Froissart´s Chronicles open a window into a fascinating world. Fourteenth-century Europe in all its political, social and military complexity unfolds before us over a compelling narrative of more than three million words. Primarily interested in chivalry and warfare, the chronicler was also keen to understand the mainsprings of the Peasants´ Revolt in England and the causes underlying the growing social unrest in the weaving towns of Flanders."

The 'Online Froissart' offers readers virtual access to the several manuscripts facsimiles, transcriptions of the texts, and a new translation into modern English of selected chapters from the first three Books of the Chronicles (which covers the years 1322-1388).

The site also includes seven essays written by esteemed scholars such as Christopher Allmand and Anne Curry, which deal with Froissart, the manuscripts, and the Hundred Years War.

The launch of the `Online Froissart´ coincides with the inauguration of an international exhibition on Froissart's Chronicles and the Hundred Years' War at the Musée de l'Armée, Hôtel national des Invalides, in Paris. The exhibition will celebrate the craftsmanship of book producers, and artists working in Paris during the first two decades of the 15th century. Their work is featured alongside a display of the weaponry and armoury which is illustrated in Froissart´s Chronicles. These artefacts, which have been loaned from the Bibliothèque nationale de France and the Municipal Library, Besançon, are intended to give visitors an insight into warfare at this time.

The exhibition is part of a wider international project based on Froissart´s Chronicles. With support from the Leverhulme Trust and Worldwide Universities Network, nine complete manuscripts of the Chronicles were digitised for the `Online Froissart´ and Paris exhibition. They are viewable online as transcriptions and images, and can be explored at close quarters during the Paris exhibition via touchscreens using the `Kiosque´ software specially developed at the University of Sheffield with Tribal Group by Mike Meredith.

A roundtable presentation and discussion of the project is scheduled for the 45th International Congress on Medieval Studies at Western Michigan University, Kalamazoo.