17th Annual ACMRS Conference: Performance and Theatricality in the Middle Ages and Renaissance 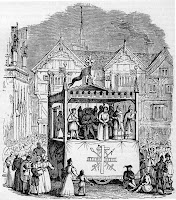 The Arizona Center for Medieval and Renaissance Studies (ACMRS) has issued a Call for Papers for their 17th Annual ACMRS Conference, which will be held in Tempe, Arizona from February 10-12, 2011.

The theme for the 2011 conference is Performance and Theatricality, a platform for critical interpretations of the dramaturgy, versification, and staging of Medieval and Renaissance life. Proposal topics could include, but are not limited to, oral-memorial performance (minstrels, jongleurs, scops, etc.), song, instrumental music, plays/dramas (liturgical, mystery plays, moralities, sotties, farces, etc.), reading aloud, the performative use of texts/images/objects, images of performance, ceremony and ritual, discourses on performers and performance (sermons, prohibitions, etc.), and self-representation (identity as performance).

Selected papers related to the conference theme will be considered for publication in the conference volume of the Arizona Studies in the Middle Ages and the Renaissance series, published by Brepols Publishers.

The conference keynote speaker will be Pamela Sheingorn. Dr. Sheingorn specializes in the European Middle Ages, especially in visual, cultural, and women's history. Her research areas include hagiography, drama, and visual culture. Her books include: Myth, Montage, and the Visible in Late Medieval Manuscript Culture: Christine de Pizan's Epistre Othea (2003, co-authored with Marilynn Desmond); Writing Faith: Text, Sign, and History in the Miracles of Sainte Foy (1999, co-authored with Kathleen Ashley); The Book of Sainte Foy (1995); Interpreting Cultural Symbols: St. Anne in Late Medieval Society (1990); and The Easter Sepulchre in England (1987). Her current research projects focus on representations of the late medieval family, medieval masculinities, a cultural history of Joseph the Carpenter, and illuminations in medieval drama manuscripts.

Before the conference, ACMRS will host a workshop on manuscript studies to be led by Timothy Graham, Director of the Institute for Medieval Studies at the University of New Mexico. The workshop will be Thursday afternoon, February 10, and participation will be limited to 25 participants, who will be determined by the order in which registrations are received. Email acmrs@asu.edu with “conference workshop” as the subject line to be added to the list. The cost of the workshop is $25 and is in addition to the regular conference registration fee.

The deadline for proposals is 9:00 p.m. Mountain Standard Time on 17 October 2010. Proposals must include audio/visual requirements and any other special requests. Subsequent a/v requests may not be honored without additional charge. In order to streamline the committee review process, submissions will only be accepted at http://link.library.utoronto.ca/acmrs/conference/ from 1 June through 17 October 2010.