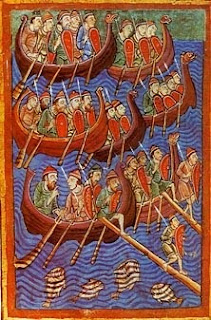 The macho world of the male Viking will be brought to life at an event taking place at The University of Nottingham this weekend. The Midlands Viking Symposium 2010, taking place on Saturday April 24, will bring together some of the country’s leading experts to present the latest research findings on Viking culture and history.

This year’s theme 'Viking Masculinities' will focus on what it meant to be a man in the Viking age and the programme of talks will cover some of the most recognisable symbols of Norse culture, including runestones, burial rituals and the passage of warriors into Valhalla.

Professor Judith Jesch, Professor of Viking Studies in the School of English Studies at The University of Nottingham, said: “We’re all familiar with the Viking stereotype and the theme of the symposium this year is looking at how, as with many stereotypes, there is often a strong grounding in the truth.

“Women played an important role in Viking society — after all, every Viking warrior must have had a mother, most had a wife or a sister too. Despite that, in many aspects such as religion and warfare, it was still very much a man’s world.”

Among the highlights of this year’s programme will be a lecture by Professor James Graham-Campbell of the Institute of Archaeology at University College London, one of the UK’s leading authorities on Viking archaeology. His talk entitled Dead Men Walking will focus on the archaeology of Viking burials, in which warriors were interred with a full set of armour and weaponry to enable them to take their place in Valhalla and fight among the army of the Norse god Odin.

Dr Carl Phelpstead of Cardiff University will be examining how the advent of Christianity in Scandinavia brought with it a new age of male domination through the church in his talk on The Masculine World of Bishop Laurentius of Hólar.

Nottingham’s Dr Christina Lee will speak on Moving Men: Migrations Around the Irish Sea, which will discuss some of the Viking activities in Ireland, where the Vikings were not previously believed to have a strong foothold.

The importance of women in Viking society will be acknowledged by Dr Philip Shaw of the University of Leicester, whose lecture Viking Thomasinas: Cross-Gender Name Elements in Viking Naming Practices will look at the use of male name compounds in naming female Viking children. He will argue that the practice was employed to signal relationships between male and female relatives or to promote familial cohesion through marriage.

The event will also draw on research being produced by postgraduate students at Nottingham including John Quanrud, who will speak on the victim’s point of view in Viking Armies Through Enemy Eyes: Scandinavians in the Anglo-Saxon Chronicle. His talk will examine the terminology used by the Anglo-Saxons to describe the Scandinavian invaders, who were variously known as the Danes, Norsemen and the Heathen Army.

The event will also feature an exhibition and talk by poet Tessa West, whose works in The Other Vikings focus on the important role of women in Viking society.

Organised by the universities of Nottingham, Birmingham and Leicester, the event is now in its sixth year and is open to the general public as well as the academic community.

Professor Jesch added: “We really want to stress that this event is open to all and we would welcome anyone with an interest in the Viking age, whatever their background. In previous years we have had a very varied audience — everyone from academics and students to primary school teachers and even Viking re-enactment enthusiasts.

“We strive to produce a stimulating programme that features talks from some of the country’s leading authorities on the subject, while also offering access to ideas coming out of current research by postgraduate students.”

Click here for more details about the symposium (PDF file)