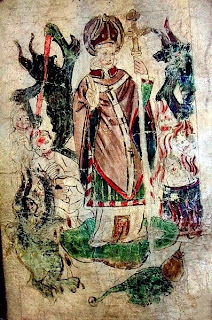 Choral music from a unique medieval manuscript, some of which hasn’t been heard for hundreds of years, will be ringing out at The University of Nottingham when an internationally acclaimed vocal ensemble performs at the Lakeside Arts Centre.

The Binchois Consort will be performing a varied programme of choral music, including a selection of chants from the Wollaton Antiphonal, a huge 15th century illustrated medieval service book. They will demonstrate vividly in sound the rich legacy of the Antiphonal, and of English sacred music of the time.

The concert in the Djanogly Recital Hall at Lakeside on Saturday May 8 at 7.30pm will bring to life some of the medieval music contained within the 412 vellum leaves of the manuscript.

The Antiphonal was made in about 1430 for Sir Thomas Chaworth of Wiverton, the richest man in Nottinghamshire. When he died it was bought for the Parish Church, St Leonard’s in Wollaton. It survived the Reformation when many such service books were destroyed because it was moved into Wollaton Hall library for safekeeping. It was then returned to the church in 1924 when the family sold the Hall but its deteriorating condition prompted St Leonard’s to place it in the care of the University where work is being carried out to conserve and protect it.

Several leaves from the Antiphonal will be on display in an exhibition Saints Sinners and Storytellers, which can be viewed at the Weston Gallery, Lakeside Arts Centre on University Park from April 30 until August 8 2010.

Early music expert, Philip Weller, from the University’s Music Department, is one of the few scholars who has had the opportunity to view the Antiphonal owing to the fragile state of the leaves. Once the preservation of the manuscript is complete it will be possible for scholars to make a detailed study of the contents.

He said, “The Antiphonal is a rare survival, not only for its physical size and visual splendour but also for the valuable information it has to offer us. It gives us a vivid idea of the religious culture of the time, and how it was expressed musically — and also, not least, how incredibly varied it was. In the Binchois Consort recital, we’ve tried to show how the chants contained in the Antiphonal relate more widely to the kinds of polyphonic music (music arranged in several parts) that might have been heard during the various phases of its early history, from its origins up to the time of its arrival, and subsequent use, in Wollaton.”

It is known from preliminary study that the Antiphonal contains music for the daily services of the medieval church, and has chants that were standard in the Sarum Use of the medieval English liturgy, as well as some later additions of chants that derive from the York Use, and which point, interestingly, towards evidence of Nottinghamshire ownership. The manuscript also includes chants for a whole range of special feasts and saints’ days.

The Wollaton Antiphonal is particularly famous as the only known source for the chants written in honour of a little-known English saint, St John of Bridlington. He was a local English saint from Thwing in East Yorkshire. Known then as John Twenge, the cleric held a number of posts with St Mary’s Abbey in Bridlington and died in 1379. He was canonised in 1386, the last English saint before the Reformation, after he ‘appeared’ to five sailors from Hartlepool whose ship was in danger of sinking. The story goes that he appeared to them wearing his habit and brought them back to the safety of the shore. The men left their vessel at the harbour and walked to the monastery where they thanked John in person for saving their lives. The stained glass window in the priory church in Bridlington depicts St John as a teacher and prior. He is also the patron saint of women in difficult labour.

The Binchois Consort will perform several chants and also sections of the three-voice Mass which is one of the earliest known masses to be unified by a single plainchant melody, the ‘Quem malignus spiritus’. This mass exists in a source in Cambridge University Library, but also, more intriguingly, in Continental manuscript sources as well: the Trent Codices in northeastern Italy, and a fragment of a manuscript in Lucca, originally from Bruges. So the survival of the Bridlington chants in Nottinghamshire proves to have a thoroughly international resonance!

The polyphonic works that will be performed together with the chants from the Antiphonal were written by musicians associated with the household chapels of the Lancastrian kings: Henry V (r.1413-1422) and Henry VI (r.1422-61, 1470-1) and their close associates. The composers include the famous twin lights Leonel Power (d.1445) and John Dunstable (d. 1453), as well as others such as Thomas Damett, John Cooke (d.c. 1442) and Nicholas Sturgeon. A later generation is represented by the great figure of Walter Frye (d.1474), one of whose motets was known the length and breadth of Europe. The concert opens with a Gloria ascribed to ‘Roy Henry’, very probably Henry V himself.

After the concert at Lakeside Arts Centre on May 8 the Binchois Consort will record the ‘Quem Malignus Spiritus’ Mass for release on the prestigious Hyperion label in late 2010.