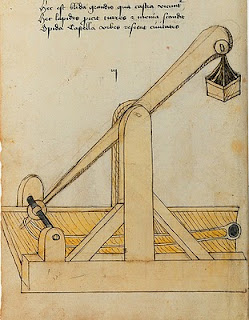 The Great Northern Medieval Fayre will be hosting its first annual Trebuchet Competition on Saturday, June 5th and is inviting people and groups to take part. Contestants will get to fling three pound cabbages at distances over 150 feet with the winners receiving trophies and prizes.

Members of the Ontario Section of the American Society of Mechanical Engineers will be overseeing the competition as its judges. The competition is open to children of all ages, as well as adults and groups.

“The fun begins June 3rd, right on the shores of Georgian Bay, in Clearwater at the Great Northern Medieval Fayre,” says Linda Laforge, co-producer and head Lady in Waiting of the festival. “We’ve medieval falconers, archers, merchants, musicians, artisans and jousting knights in shining armour on horseback ... in fact, just about everything for a fun family excursion. It’s like having the Middle Ages transported into your own back yard.”

The Great Northern Medieval Fayre will be held from June 3-6, 2010, and marks the first time the event will be held. The organizers expect several thousand people to attend over the four day period, which is being held near the town of Collingwood, about an hour north of Toronto.

Go to www.medievalfayre.com for more information about the fair and the competition.