Westminster Abbey has commissioned conservation work on the Coronation Chair in which nearly every British monarch has been crowned since 1308.

Only three sovereigns were not crowned seated in the large oak chair - Edward V, Edward VIII and Mary II. But wear and tear has taken its toll since the royal seat, housed at Westminster Abbey, was commissioned by Edward I in 1300.

Much of its rich paintings, ornate gold gilt and glasswork has been lost over the centuries and the wood damaged by the graffiti of 18th and 19th century schoolboys.

Dr Tony Trowles, head of the Abbey Collection, said: "At first sight it looks an odd chair for a monarch to be sat in but it originally had foliage and birds and the image of a king.

"It's a slightly battered object but what does survive is particularly fragile and needs to be stabilised.

"The work is really conserving the original medieval paintwork and gilding, much of which was lost over the centuries."

Work will be carried out in a specially-built enclosure in St George's Chapel in the Abbey which means that visitors to the Abbey will be able to see the work taking place. Marie-Louise Sauerberg, a painting conservator from the Hamilton Kerr Institute, part of Cambridge University, will be working with colleagues on the oak artefact.

She said, “This is such a unique and rare object we need to have it somewhere like here where we can we really have a look.It’s difficult to say whether there will be any great finds. We’re right at the beginning of the process and people have already looked at it in the past – before the Queen’s coronation in 1953 they did a very good study.” 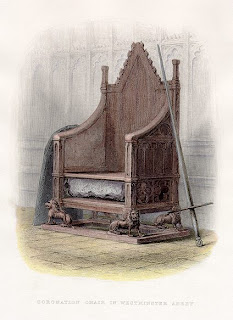 A survey of the Coronation Chair carried out at the end of 2003 revealed that although the original structure was relatively sound, much of the surviving medieval paintwork and gilding needed conservation. In April and May of 2004 conservators from the Hamilton Kerr Institute worked on the chair in its normal position in the Abbey to re-fix and consolidate areas of paint and gilding which had gradually become detached from the wooden surfaces to which they had been applied more than 700 years previously.

At that time further desirable conservation work was identified which could only be carried out in a studio environment where temperature and relative humidity are controlled and where the conservators would have proper access to all of the chair’s surfaces. This is the delicate and painstaking work which is about to begin. In addition to the consolidation of further fragile areas of paint and gilding the work will include the careful removal of later unsightly layers of polish and wax which now dull the appearance of the chair.

The opportunity will also be taken to remove areas of brown paint applied when the chair was prepared for use at Queen Victoria’s Jubilee service, held in Westminster Abbey in 1887. In some places this Victorian paintwork obscures surviving portions of the chair’s original medieval gilding.

As the Coronation Chair is only definitely known to have left Westminster Abbey on two previous occasions it was decided to undertake the conservation work at the Abbey. So, the chair has been moved to the enclosure in St George’s Chapel at the west end of the Abbey’s nave. Conservation work is expected to take approximately one year. Before the chair was moved the condition of the painting and gilding was checked for further deterioration, and X-rays were taken to identify any structural weaknesses.

The Department of Culture, Media and Sport has given Westminster Abbey a £150,000 grant towards the project, with the abbey contributing a further £50,000.

The Coronation Chair was made on the orders of King Edward I in 1300–1 to enclose the Stone of Scone (also called the Stone of Destiny), which he had brought from Scotland in l296 and placed in the care of the Abbot of Westminster. Until the removal of the Stone to Scotland in 1996 the Chair was the oldest piece of furniture in England still used for the purpose for which it was made.

Edward I commissioned Master Walter, a court painter, to decorate the chair with patterns of birds, foliage and animals on a gilt background. The figure of a king, either Edward the Confessor or Edward I, his feet resting on a lion, was painted on the back.

The Stone was originally totally enclosed under the seat but over the centuries the carved wooden panel at the front was torn away. In the early sixteenth century four gilt lions were added at the base of the chair; the present lions are replacements dating from 1727.

While the medieval Coronation Chair is being conserved the replica chair, which was the one used by Queen Mary II as Queen Regnant at her joint coronation with King William III in 1689, will take its place on display in the Abbey. This later chair, which has never subsequently been used at any coronation, is normally displayed in the Abbey’s Undercroft Museum.

Visitors can see the work taking place in St George's Chapel during normal opening hours. Work is due to start at the end of April.