Medieval Guildhall to be redeveloped into heritage centre 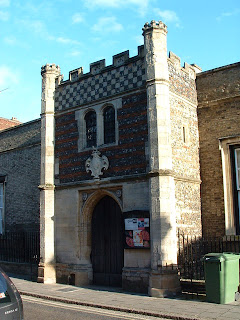 A medieval guildhall dating from the 13th century looks set for an exciting future with the launch of a new project to see it developed as an exhibition and heritage centre.

Bury St Edmunds, in the English county of Suffolk, is more often associated with the great Benedictine Abbey that once dominated the spiritual, administrative and artistic life of much of medieval East Anglia. The Abbey controlled vast resources throughout the region and enjoyed a sometimes strained relationship with the medieval town that grew up in its shadow. The Guildhall was built by the townspeople of the borough as their own civic centre and was often the focus for on-going disputes between the monks and their secular neighbours.

“The Guildhall was constructed by the townspeople”, states project manager Matthew Champion, “as a focus for their own civic pride and ambitions. It was a symbol of both their defiance and wish for independence from their powerful monastic neighbours”. On several occasions this uneasy relationship between the two authorities developed into direct confrontation. In both 1327 and 1381 the tensions erupted into violence and resulted in large scale rioting and bloodshed. In the earlier dispute the townspeople went as far as capturing the Prior and several of his fellow monks and holding them prisoner in the Guildhall itself.

The earliest recorded reference to the Guildhall within Bury St Edmunds dates from 1279 and at least sections of the present building date back to this period. The Guildhall was largely rebuilt in the 15th century and both the roof and elaborate decorative porch date from this rebuilding. Today the building is recognised as being of national historic importance and is a grade 1 listed building. The 15th century porch is regarded as a rare late medieval survival and has been accorded the status of a Scheduled Ancient Monument (SAM).

“Despite being extended and re-faced in the recent centuries”, continues Matthew Champion, “the core of the building remains essentially medieval. From the street the building may look 19th century, with a very fine late medieval porch, but as soon as you walk through the door it becomes obvious that you are standing in a medieval building of some magnificence. When it was first constructed the Guildhall would have been amongst the finest found anywhere in England”.

The town of Bury used the Guildhall as its council chambers from the early 17th century until 1966. One of the main chambers also served as a courtroom for the borough for over two centuries. The building has also acted as the home for the town library, a theatre and a shop. Today much of the building is empty and un-used.

The aim of the Guildhall Project is to reopen the building to the public as an exhibition and heritage centre. The proposed development will include three major exhibition spaces, courtyard café, education centre, garden and comprehensive displays on the history of the building and medieval Bury St Edmunds. It is anticipated that the building will display parts of the collection from the former Manor House museum, travelling exhibitions and become a venue for both corporate events and small conferences. The project is being led by the Bury St Edmunds Heritage Trust, in association with the Guildhall Feoffees who own the property. “The Feoffees are a unique survival in their own right”, continues Matthew Champion, “that have their origins in the medieval Candlemas Guild that once thrived within the borough. Today they carry on an over 600 year old tradition in promoting the best interests of the town. In effect, one medieval survivor is helping to ensure the survival of another”.

Despite being in the early stages of the project the Trust are already keen to draw attention to the Guildhall. “The Guildhall was built by the townsfolk of Bury St Edmunds”, stated Trust chairman Robert Lamb, “and it was central to life within the town for over five centuries. The building has seen so many events over the years and has played an important part in the town’s history. Our project aims to bring the Guildhall back into the mainstream of the town’s life. We want it to become, once again, a centre for all that is best about Bury St Edmunds, both past and present”.

The Guildhall is planned to be open to the public during the Heritage Open Days in September when the public are invited to come along and find out a little more about its fascinating history. For further information on the Guildhall Project please contact: