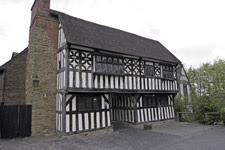 A team of top archaeologists have been drafted in to explore a number of secret tunnels that have been found underneath a medieval building in the West Midlands borough of Sandwell in England.

The tunnels have been found at the 13th century West Bromwich Manor House.

As part of Sandwell Council's on going programme of restoration of this important historic building, an entrance and exit to a series of tunnels were found when the moat was drained earlier this year.

Frank Caldwell, principle officer for museums arts and tourism, said: "We discovered an entrance large enough for a person to crawl through that seems to connect to some open drainage channels at the other end of the building.

"It's possible that this tunnel was part of the medieval sewage disposal system for the Manor House which diverted a local spring under the building to remove toilet waste from beneath the toilets.

"It's large enough for a person to crawl into because that’s how any blockages would have been removed in medieval times.

"Clearing medieval toilets was a regular task and carried out by a particular member of a household staff know as a 'Gong Farmer', added Mr Caldwell.

Now a team of archaeologists under the direction of historic buildings expert Dr Malcolm Hislop from Birmingham University are planning to explore the tunnels.

Mr Caldwell added: "The purpose of the exploration is twofold. Firstly, to attempt to confirm this is, in fact, what the tunnels were for. Secondly, to check the condition of the tunnels and see if the network extends under other parts of the building."

Mr Caldwell said the archaeologists will access the tunnels and measure and photograph their extent to help us understand more about how the manor house was built, used and developed.

"Unfortunately the tunnels are too small to allow public access. In fact, I'm pleased about this because no way would you get me into them," he added.

West Bromwich Manor House was built by the de Marnham family in the late 1200s as the centre of their agricultural estate in West Bromwich. Only the Great Hall survives of the original complex of living quarters, agricultural barns, sheds and ponds. Successive occupants modernised and extended the Manor House until it was described in 1790 as “a large pile of irregular half-timbered buildings, black and white, and surrounded with numerous out-houses and lofty walls.”

The grade 1 listed building is being opened for free tours for the public for two days over the May Bank Holiday (May 2 and 3). Staff in medieval garb will show visitors around parts of the timber-framed house in Hall Green Road that have not been open to the public for years.

Places on the tours are limited and will be on a first come, first served basis, but there will also be free entertainment in the grounds. This includes a jester and fire eater, combat demonstrations, cooking displays, bird of prey, and re-enactment of historic manorial court cases, including appropriate punishments. Afternoon tea will be available in the allotment pavilion.

The aim is to tell people about ambitious plans to turn the building into a regional tourist attraction. They can also hear about work carried out since the council took back control of the house, previously a pub and restaurant.

The house was saved from demolition by the former West Bromwich Corporation in the 1950s.