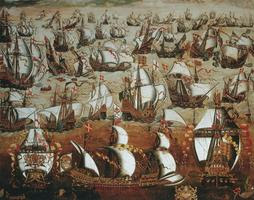 An interdisciplinary conference to be held at the University of Notre Dame this fall is making a final call for papers to explore the issue surrounding similarities between late-medieval Iberia and its colonies in the New World. “From Iberian Kingdoms to Atlantic Empires: Spain, Portugal, and the New World, 1250-1700” is being hosted by the university's Nanovic Institute for European Studies and will take place on September 17-18, 2010.

The conference organizers hope that their interdisciplinary theme will lead to better co-operation and research between historians of different periods. John Moscatiello, chair of the conference planning committee, said, “The committee settled on this topic right away because we feel strongly that medievalists, early modernists, and Latin Americanists must coordinate their teaching and research programs.  Right now, these groups tend to conduct their research in relative isolation from one another, even though scholars have long suggested important links between late medieval Spain and the New World.  Part of the problem is built into the structure of universities themselves because graduate students are trained in either medieval studies or Latin American studies with little reference to the other field.  The result is that the current historiography has not provided the specific contours of what a comparative, global history of late medieval and early modern Iberia might look like.  What are the methodological pitfalls of integrating medieval and Latin American historical research?  What are the best sources for deeply comparative work?  How do we periodize Iberian history in a global context?  Or, conversely, are such comparisons overdrawn and not worthwhile? This conference hopes to be one step in the direction of answering these questions and bringing these disparate fields into a meaningful dialogue.

“Here at Notre Dame, there has been a dramatic series of transformations in both our medieval Iberian and Latin American programs. For the first time ever, the Medieval Institute is under the leadership a specialist in medieval Iberian history, Remie Constable, who is busy overseeing the expansion of our programs in Byzantine and Islamic studies. Dayle Seidenspinner-Núñez, a professor of medieval Spanish literature, now serves as a dean in the College of Arts and Letters and Sabine MacCormack has been a tireless and highly effective advocate of developing the program in Latin American studies.  Our undergraduate students are enrolled in Quechua courses and have drawn from the resources of the Nanovic and Kellogg Institutes to conduct original research in Europe and Latin America.”

The conference organizers also have announced that the Journal of Medieval Iberian Studies will be publishing a special issue of the conference proceedings in 2012 which will include six to eight articles that originate from this conference. John Moscatiello adds that the journal's editors “have been enthusiastic about the conference from the outset because they are committed to bringing medievalists, early modernists, and Latin Americanists into meaningful dialogue with one another.  In fact, the recent obituaries for convivencia and Reconquista that have appeared in the Journal of Medieval Iberian Studies (and other journals) have further underscored how unreliable these categories have become for our research programs.  The future of medieval Iberian history, like the future of medieval studies in general, will have to be comparative and global in its orientation and will have to push medievalists out of their comfort zones”

The final day to submit a proposal for a paper is May 1st. You are asked to email an abstract of 250 words, a cover letter, and a curriculum vitae to Iberia.conference@gmail.com. For more information about the conference, please go to http://iberiaconference.eventbrite.com/