A major conservation and archaeological project has been carried out at Mettingham Castle, in Suffolk, England. The castle ruins were in a serious state of disrepair when English Heritage stepped in with a grant of £290,565 to undertake vital remedial work.

Mettingham Castle was built by John de Norwich who was given a licence to crenellate in 1342 as a reward for military service. John de Norwich was the last of the de Norwich’s, an eminent East Anglian family of the Late Middle Ages. As the castle was constructed at the end of Suffolk’s castle-building period, it is likely that it was built for social display rather than defence. In 1394 it was given to a College of Secular Canons and from then until 1542 was occupied at any one time by 13 boys and their teacher before being surrendered to the Crown during the Dissolution of the Monasteries. 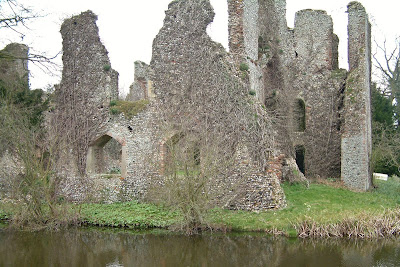 Mettingham Castle is now in the private ownership of Rowan and Jenny Gormley, their house is situated within a large moated area of the walled castle. The couple bought the property 14 years ago and sought advice from English Heritage and Suffolk County Council on how they might go about undertaking the restoration works needed.

Gary Griffin from English Heritage said, “When English Heritage was first asked for advice on Mettingham Castle in 2005, significant conservation work was needed to secure the towers and the castle walls. The ruins were in rapid decline, exacerbated by years of weather damage and ivy growth.

“We are delighted that our grant and the advice of our experts has helped to make a major difference to repairing and consolidating the castle for current and future generations to enjoy, working in close partnership with Jenny Gormley and her architect and contractors. Following the successful completion of these works, we are delighted to report that the castle will be removed from English Heritage’s ‘Buildings at Risk’ register next year.”

“We also welcome the great efforts of Suffolk County Council, which is currently producing a full archaeological report based on its studies of the castle keep.”

Architect for the project Tim Buxbaum explained the conservation process: “The most challenging task was stabilising the towers. We erected enormous quantities of scaffolding and carefully drilled holes in the walls at varying heights for structural purposes. The holes were anything up to 5.5m long, and the drilling was not easy because the walls are made of flint, which is hard to drill. Once the holes were drilled, stainless steel reinforcement bars encased in ‘socks’ were put into the holes, and the ‘socks’ pumped full of mortar to anchor them into position. The anchors effectively lock the structure together to reduce the risk of relative movement of the walls.

“Circular brick plugs have been placed at the ends of the holes so that the anchors, although relatively unobtrusive, will be obvious to historians of the future as a record of this particular architectural intervention.”

Alongside the conservation work, archaeologists from Suffolk County Council have been surveying the castle keep. David Gill from the Suffolk County Council Archaeological Service Field Team said: “We have discovered previously unrecorded architectural details which have added greatly to our understanding of the function and former appearance of this, the focal part of the castle.”

A full archaeological report is in production and there is discussion underway about the possibility of future geophysical surveys to complete the groundplan.

Owner of the castle, Jenny Gormley said: “When we moved in 14 years ago, the ruins were in a bad state of repair and looked in some places as if they were about to fall on our heads! English Heritage has been very supportive of our efforts to preserve what’s here before it disappears. And we are very excited by the work the archaeological team has been doing to uncover the history of such an important building.”