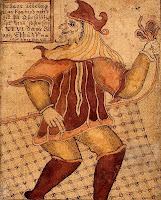 Vikings had the same concerns about choosing their children’s names as we do, says a researcher from the University of Leicester who delivered his paper at a recent Viking conference. The sixth Midlands Viking Symposium was held at the University of Nottingham on April 24th, with eight talks by Viking experts.

Dr Philip Shaw, a Lecturer in English Language and Old English, offered his expertise on how the Vikings named their children. He discussed the practice of giving names derived from male names to female children, which was commonplace in the Viking Age.

He said, “My paper on 'Viking Thomasinas' examines the use of female names developed directly from male names, similar to the more recent name Thomasina. Viking Age Scandinavia saw a remarkable surge in the creation of such names, reflecting in some cases a need for a new way of signalling relationships between female children and their fathers. In other cases, the female versions of new male names are actually more popular than the male originals, suggesting a more conservative attitude to naming boys than girls.

“Such conservatism is, in fact, still with us today. Anxieties about the masculinity of names are very much alive and well: witness the switch of Evelyn from male to female during the twentieth century - and expect Jo(e) to follow suit in due course. This says a lot about our - and the Vikings' - attitude to the importance of male children, and the relative impact of experimental/cross-gender naming on boys and girls."

The symposium sought to broaden the picture of Viking men, opening up the range of ways in which men were men in the Viking world. Dr Shaw added, “The Midlands Viking Symposium brings cutting edge research to a wider public, but it's just as important that it brings the wider public to the researchers - looking beyond academia opens up ways of thinking about the Vikings and their legacy that feed back into and enrich research.”