Cultural Memory and the Resources of the Past, 400-1000 research project gets funding 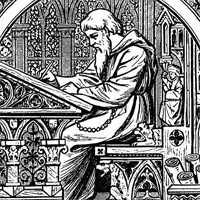 A new research collaboration involving historians from Cambridge is to examine how early medieval societies used the past to form ideas about identity which continue to affect our own present.

The project will cover six centuries of western European history, from 400 to 1000 AD, and will investigate how earlier cultural traditions, coupled with other sources, such as the Bible, influenced the formation of state identities following the deposition of the last Roman emperor in the West in the fifth century.

It will also consider how, in turn, the concepts about ethnicity and society that emerged continue to influence the shape of modern Europe.

The three-year study, entitled "Cultural Memory and the Resources of the Past, 400-1000", is a joint research project between the University of Cambridge, Vienna, Utrecht and Leeds. It is being funded with a grant from the HERA (Humanities in the European Research Area) Joint Research Programme worth one million Euros.

It will focus on two principal issues - the ways in which texts were "transmitted" from one individual centre to another, and the problem of identity formation itself in the complex social, political and religious melting pot of early medieval Europe.

The early middle ages were a formative period in western European history, but their cultural inheritance, the way in which those ideas were absorbed and the lasting impact of that process, remain little-studied to date.

The period 400 to 1000 witnessed the spread of Christianity and the formulation of new ethnic identities and new ideas about different western European societies, which were often put forward by the emerging elites of the time.

Many of these rulers referred to the Latin Bible as a source not just of supreme law, but as one of authoritative history and commentary on the present. At the same time, they also revered the classical world. Rome, the source of Latin texts which could open up an enlightened interpretation of the Bible, became associable with cultural and religious power. During the period, classical texts themselves developed an authoritative status as a source of traditions and ideas.

Researchers argue that as this happened, the roots of a number of modern myths which still affect European societies today were formed. Current ideas about national origins, the perceived dangers of mass immigration, the "otherness" of cultural and religious groups, the Christian identity of Europe as a whole, and the cultural consequences of its Christianity all find their foundations in the early medieval period.

The research project will examine how this happened and what its effects have been. Scholars will investigate issues such as how the Roman imperial past affected the early medieval mindset, and the complex processes by which ideas were exchanged between the Greek-speaking Byzantine world to the East, and the Latin-dominated West.

The Cambridge team will be led by Professor Rosamond McKitterick. Two fully-funded PhD projects will examine the way in which Roman and Byzantine cultural concepts were adopted, and interpreted, during the earlier part of the period (the sixth and seventh centuries) as well as during the Carolingian Renaissance of the ninth and tenth centuries.

In particular, they will study the transmission and translation of ecclesiastical history with reference to the Historia Tripartita - the sixth century history of the Church, compiled by the scholar Epiphanius, under the direction of Cassiodorus. This will be cross-referred with the later, ninth century Frankish chronicle by Freculf of Lisieux, which described the conversion of Gaul.

The project is one of a number funded by HERA to examine questions of inheritance and identity in Europe. Further information about the grants can be found at http://www.heranet.info/Default.aspx?AreaID=89. The project team will, in addition, be setting up a website enabling public access to preliminary reports, materials and results as their work progresses.

Professor McKitterick has also been named one of six new Heineken Prize Laureates for 2010. These international prizes, which are funded by the Dr. H. P. Heineken Foundation and the Alfred Heineken Fondsen Foundation, are awarded every other year to internationally acclaimed scientists and scholars for outstanding contributions in their field. She is the first historian in a British university to be awarded this prize. Other Heineken prizewinners in the sciences from the University of Cambridge include Aaron Klug and Sir Michael Berridge.

Professor McKitterick has held the Chair in Medieval History at the University of Cambridge's Faculty of History since 1999 and is the author of numerous publications on the political, cultural, intellectual, religious and social history of Europe in the middle ages. The award panel's notes observe that "her research has fundamentally changed how we view the Carolingians and the interplay of politics, religion and scholarship in their time.