BBC and British Library look at the history of maps 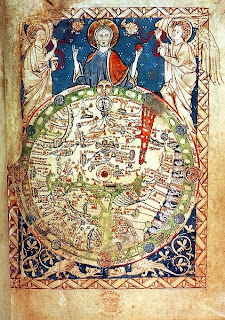 The BBC and the British Library are collaborating on projects that will explore the history of maps going back to the Middle Ages. BBC Four begins by offering two new series: Maps: Power, Plunder and Possession, and The Beauty of Maps.

Maps: Power, Plunder and Possession, which begins this weekend, is a three-part series presented by Renaissance academic Professor Jerry Brotton, which tells the epic and beautiful story of cartography, from hammered rock art through to the planetary images of Google Earth. The Beauty of Maps is a four-part series, made by Tern Television, which will reveal how a cartographic image is as much about the beauty of its colours, lines, shapes and lettering as it is a geographical tool to aid navigation.

Richard Klein, Controller of BBC Four, says: "Maps, combining artistry, science, history and culture, are a great example of what BBC Four is all about: offering real insight and discourse on a major aspect of our cultural heritage.

"BBC Four continues to be fascinated with the exploration of all things cultural, and maps have contributed to culture in a unique way.

"Beyond their function maps are also fascinating works of art in themselves and through our Maps Moment we hope to go some way towards illustrating their true meaning and beauty."

The Beauty of Maps also has an online counterpart featuring exclusive content thematically aligned to the TV series. Users will be able to explore five historic maps, including the Psalter Map of 1260.

Meanwhile, the British Library will unveil a new exhibit on April 30th entitled Magnificent Maps: Power, Propaganda and Art, where 100 of the greatest maps in the world will go on display over the summer.

Drawn from the 4½ million items held in the British Library's cartographic collections - the greatest map collection in the world - this new exhibition will showcase over 80 of the most impressive wall-maps ever created, dating from 200AD to the present day, most of which have never been seen before.

Recreating the settings in which they would have originally been seen - from the palace to the schoolroom, the exhibition reveals how maps express an enormous variety of differing world views, using size and beauty to convey messages of status and power.

Peter Barber, Head of Map Collections at the British Library, said "Maps are often pictorial encyclopaedias that are about far more than just geography - Magnificent Maps is a visual extravaganza that will, I hope, intrigue, fascinate and entrance visitors while challenging their assumptions about the very nature and purpose of maps."

Click here to go the BBC program The Beauty of Maps