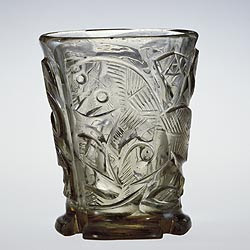 The Corning Museum of Glass in New York State has opened a new exhibit displaying over a hundred examples of glass that were made in the Middle Ages. The exhibition Medieval Glass for Popes, Princes, and Peasants will follow the evolution of glass production over 1,000 years, from its height in the Roman Empire until the golden age of Venetian glassmaking during the Renaissance.

The glass vessels and objects in the exhibit will range from highly decorated drinking vessels to church reliquaries—highlighting the many uses of glass in medieval society, and the significance of the material to local economies, religious ceremonies and scientific developments.

“The phrase ‘medieval glass’ often evokes an image of stained glass windows, but there exists a remarkable range of glass objects made for daily use which provide rare insight into a cross section of medieval society,” explains Dr. David Whitehouse, executive director of The Corning Museum of Glass and curator of this exhibition. “The objects in the exhibition trace the history of the Middle Ages in Europe through the lens of glassmaking. The story touches on politics, trade, urbanization and the disintegration of cities, religion, science, and technology and highlights the importance of the material to the development of the world we know today. Its arc spans a period of 1,000 years – nearly one quarter of the history of glassmaking – and depicts the rise of glassmaking from a dark period of reduced knowledge to an era of innovation.”

The more than 100 objects in Medieval Glass are drawn from the Corning Museum’s collection, as well as from museums and cathedral treasuries in Europe, where many pieces were held for centuries without being properly identified. Some were discovered during archeological excavations—which gave scholars and archeologists a groundbreaking new vision of the richness and variety of medieval glass, its production centers and techniques used by medieval glassmakers.

One area of the exhibit will display glass objects used for eating and drinking, arranged chronologically to show the evolution of glass tableware through this thousand-year period, and to illustrate the increase in the decoration and complexity of the glass vessels as glassmaking techniques were rediscovered in the late Middle Ages. Copies of illuminated manuscripts and paintings throughout the exhibit will illustrate how these glass objects were used and valued in medieval society.

Other sections of the exhibit explore glass for the church and treasury, and glass used for science and medicine—including glass used in scientific instruments, for medical diagnosis and alchemy, as well as the critical development of reading spectacles and other lenses. A gallery reminiscent of a medieval cathedral will feature the sole stained glass window in the exhibition, as well as highlights of glass used in the church: ceremonial lamps, drinking vessels and glasses used to preserve relics. Examples of the rare and mysterious group of objects known as “Hedwig” beakers are a highlight of this section.

These beautiful glass cups, found in treasuries across Europe, are unlike any other medieval objects of glass or rock crystal from the Islamic world, Byzantium or western Christiandom. The group is named after Saint Hedwig of Silesia (d. 1243), a Germanic queen who was canonized as a saint for her piety—which extended to abstaining from wine drinking, much to the disdain and social embarrassment of her husband. Miraculously, her glass beakers, which bore the same engraving as the beakers in the exhibition, would fill with wine whenever the king’s spies were nearby. Scholars have variously argued about the origination of the beakers and many believe they were made in the medieval Islamic world. In this exhibition, Whitehouse attributes the beakers’ origination to glassmakers in Palermo, Sicily, under the reign of a Norman king. The objects likely made their way to Germany after the marriage of the king to a German noblewoman.

Videos in the galleries will illustrate how modern glassmakers have experimented with medieval techniques to identify and understand these objects in the exhibition were made.

The Corning Museum of Glass offers live glassblowing demonstrations all day, every day, as part of the visitor experience. At select shows each day during the run of the exhibition, visitors will be able to see how certain objects in the Medieval Glass exhibition were made.

The exhibition runs until January 3, 2011. The Corning Museum of Glass is located in the Finger Lakes Wine Country of New York State. Click here to go to their website.