Autobiography of James I of Aragon published in Japanese 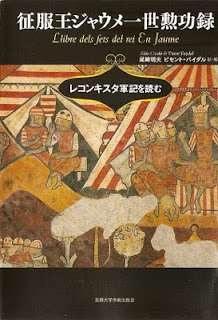 The writings of a medieval king are finding new popularity in Japan. A Japanese translation of The Book of Deeds of James I of Aragon sold out its initial printing of two thousand copies in just a few days.

The Spanish news service El Pais reports that the text was translated by Akio Ozaki of the University of Kyoto, with support from the Institut Virtual Internacional de Traducció (IVITRA) of University of Alicante.

The work known in Catalan as El llibre dels fets del Rei Jaume I, was an autobiography that the King of Aragon himself dictated. It covers his life and reign over areas of eastern Spain, and provides an important account of military and political history in the 13th century.

IVITRA director Vicent Martines said that this is "an essential book for Catalan culture," adding that it is "very interesting to the Japanese, who have discovered a king who rules, talks to his people, and who is at the same time a medieval knight."

See the IVITRA website for more information about their project

See also: The myth of minority : cultural change in Valencia in the thirteenth century at the time of the conquests of James I of Aragon

James I and his Era. Brief Analysis of a Major Political and Cultural Inheritance

How to End a Crusade: Techniques for Making Peace in the Thirteenth-Century Kingdom of Valencia