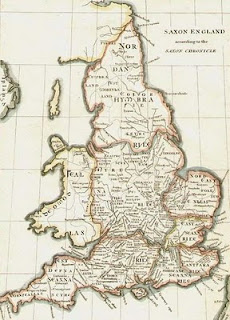 Construction work in Cheltenham, Gloucestershire has led to the discovery of a previously unknown Anglo-Saxon settlement.

Monitoring of groundworks by Cotswold Archaeology during the construction of All Saints' Academy in Cheltenham led to the discovery of two skeletons that may be Saxon. Also found was a pit containing large pieces of Anglo-Saxon pottery. Further work in the area revealed further Saxon ditches, and most spectacularly, a large timber hall built from substantial posts. The hall would have been around 11m long by 6m wide and been used for communal events including feasts.

Steve Sheldon of Cotswold Archaeology, who is directing the excavation, said it was one of the best finds of his career: "To be honest I didn't really expect to find too much when we started work on the site."

The settlement probably dates to the 6th to 8th century AD, and is of significance as it lies only a short distance from Gloucester. It is generally thought that the area around Gloucester did not succumb to Saxon control in this period, but remained a largely independent British kingdom.

Cliff Bateman, Project Manager at Cotswold Archaeology, said: "It would now appear that there were more pockets of Anglo-Saxon control in the Severn Valley than we previously thought. Anglo-Saxon burials have been found in Bishops Cleeve and Tewkesbury, but this discovery shows Saxon influence right on the very doorstep of Gloucester."

Students from two other schools, Christ College and Kingsmead School, will have the opportunity to examine the site and look at the finds in situ before they are removed for dating and recording. All of the finds will then be donated to Cheltenham Museum.

Teresa Gilpin, Headteacher of Christ College, said: "These remarkable finds have given Christ College pupils a unique contact with people 1,300 years older than them. The Academy's pupils will also benefit from the knowledge that people inhabited their site so many years previously."

Cllr Jackie Hall, Cabinet Member for Schools, said: "This is a very exciting find and I am glad some of the students are going to get to see the relics in place before they are removed and building work continues."

Cllr Suzanne Williams, County Councillor for Springbank, said: "This is an absolutely amazing find in an area that has been well used for a number of years. I hope that some kind of visual evidence will be retained for future use by the school. What better inspiration could pupils have to explore the lives of our ancestors, than physical evidence on their doorstep?"

Helena Arnold, Director of the Children and Young People's Department, Gloucester Diocese, said: "We are delighted that the results of the archaeological dig can be shared with students. This will provide an excellent learning opportunity for students even before the construction process is underway. Whilst the Academy looks to the future to provide first class facilities for the 21st century, the archaeological find is an opportunity to for students to learn about the past and the culture from which we have developed."

See also our articles: Two videos on the construction of early medieval buildings