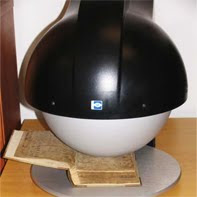 Scholars at the University of Copenhagen are now able to decipher hidden and illegible texts in damaged medieval manuscripts thanks to a special scanner that was donated to the university. Linguist Michael Lerche and his colleagues from the Department of Scandinavian Research used it to discover what were the runic letters on the cover of a 700-year-old medieval manuscript. In just a few minutes the scanner came up with the answer - an odd Latin proveb, which roughly translated says, "A countryman decided to adopt a strange habit: to put his legs in his wallet and walk on his teeth!"

Associate professor and runologist Michael Lerche had almost given up on the runic text, but new technology - a so-called multispectral scanner - helped to overcome the stains and smears that many medieval manuscripts are marred by because they have been conserved with water, urine and other liquids.

Michael Lerche explains, "The scanner employs technology that we all know from digital photography, but the difference is that it is capable of recording 19 images of the manuscript in different wavelengths, and those 19 images are layered and fed into computer software that compares the 19 layers and finds the differences between them; in this fashion we can enhance things, which are hidden in some of the layers that we humans cannot perceive with the naked eye, e.g. ink hidden under a stain."

With the scanner to hand, it took Michael Lerche a mere day to decipher the runic text and find the original source of the Latin proverb, a 16th century collection of proverbs - something that no other scholar has succeeded in doing before.

Lerche adds, "The runes that the scribe used when he copied the proverb are clearly influenced by Latin manuscript culture, and this is consistent with our knowledge that Latin proverbs were used to teach Latin. The proverb is a rather absurd one, but according to our Latin experts it simply means that time is out of joint."

According to Lerche, what makes the multispectral scanner unique - and why researchers, who are interested in medieval manuscripts, find it so promising - is that is very easy to operate for the researchers themselves; they do not have to send their manuscripts away to labs and wait months for results, but can work with the manuscripts in a process of trial and error in the comfort of their own offices. At the same time, and this is a crucial for the scholars, the scanner never touches the fragile manuscripts and therefore makes for a completely non-invasive investigative technique.

"Most medieval manuscripts contain passages that are illegible because of the ways in which they used to be stored, conserved and cleaned, and this is deeply frustrating for us. The scanner will help us read the manuscripts and also increase our knowledge of the liquids and materials they applied to the manuscripts in the past. The scanner will, in effect, make a tremendous difference to our research into Danish and Scandinavian languages and history," he concludes.