The very latest laser technology combined with old fashioned pedal power is being used to provide a unique insight into the layout of Nottingham’s sandstone caves — where the city’s renowned medieval ale was brewed and, where legend has it, the country’s most famous outlaw Robin Hood was imprisoned.

The Nottingham Caves Survey, being carried out by archaeologists from Trent and Peak Archaeology at The University of Nottingham, has already produced extraordinary, three dimensional, fly through, colour animation of caves that have been hidden from view for centuries.

Below the grounds of Nottingham Castle and across the city there is a labyrinth of medieval tunnels, dungeons, maltings and cellars — people even carved primitive living quarters out of Nottingham’s sandstone cliffs. 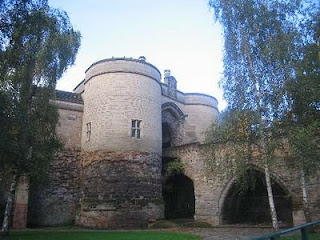 The man-made caves, cut into the strata of rock known as Sherwood Sandstone, are being recorded by laser scanners, which produce up to 500,000 survey points a second, enabling us to see these excavations as never before.

Archaeologists already know of around 450 caves — some are well documented and currently scheduled monuments of local and national importance. With funding of £250,000 from the Greater Nottingham Partnership, emda, English Heritage, The University of Nottingham and Nottingham City Council it is hoped that over the next two and a half years these and many more can be recorded and mapped.

Dr David Walker, of Trent and Peak Archaeology, said: “This remarkable new technology will create a full measured record of the caves in three dimensions. This gives us two really important things — a highly detailed archaeological record of the historic caves, and a new way for people to view caves they may never have seen before. For the first time visitors will be able to explore Nottingham’s unique caves with a laptop or smartphone over the web. However, there have to be many more caves that we don’t even know about and we want to hear from anyone who might have a sandstone tunnel at the back of their house, office or garden.”

The survey will build on the work of the British Geological Survey carried out in the 1980s. Archaeologists are using environmentally-friendly trailer-pulling bicycles to get themselves and their research equipment about the city. And if you have a cave hidden away in your back garden or at the back of your office block or home they will be more than happy to pop by.

Although many caves and tunnels are blocked up some are still accessible to tourists or used as pub cellars. The project goals are to assess the archaeological importance of Nottingham’s caves, to present the caves in a new and exciting way and to preserve Nottingham’s unique and fragile resource for future generations.

You can read and see more about the Nottingham Caves Survey at: http://www.nottinghamcavessurvey.org.uk/index.htm