Black Death - trailer for the film to be released this month 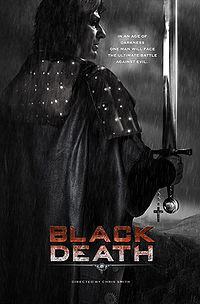 Black Death is a supernatural thriller set in 1348 as the plague sweeps through England. Osmund, a young monk, is tasked with leading the feared knight Ulrich and his band of mercenaries to a remote marshland village which has remained untouched by the Black Death. Their quest is to hunt down a heretical sorcerer, who is rumoured to be able to bring the dead back to life. After a journey beset with harrowing pitfalls, Ulric's envoy finds the village, an eerie utopia led by a beautiful witch, Langiva. After she offers Osmund his heart's desire, he is forced to choose between his faith and the secrets the village reveals.

The movie stars Sean Bean, Eddie Redmayne and Carice van Houten. It is being released in the United Kingdom on May 28th - no word yet on a North American release date.