A BBC documentary will be revealing that a medieval African lived in England in the thirteenth century and was buried in a friary in Ipswich. This is the earliest evidence that an African was living in the country since the Roman period.

The programme, History Cold Case, will be broadcasting its premiere episode on Thursday night on BBC 2. It follows a team of experts from the Centre for Anatomy and Human Identification at the University of Dundee as they analyze a skeletons from history. 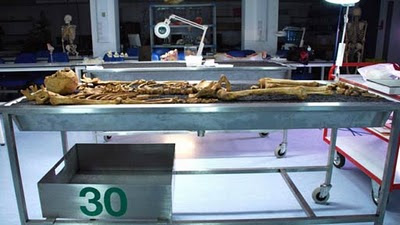 The male skeleton they discovered has been carbon dated to the period 1190-1300, and from examinations of the skull, teeth and thigh bone, it was determined that the man originally came from Tunisia.

It has been suggested that the person may have been captured during the crusades. His body was buried in a Carmelite priory known as the Ipswich Whitefriars. The monastic house stood near the centre of the medieval town of Ipswich, the county of Suffolk. The Priory was founded around the years 1278-79 and lasted until the Dissolution of the Monasteries in the 1530s. Nothing above ground remains of the site but the priory's cemetery has been explored by archaeologists.

The discovery of the man in the priory's cemetery suggests that the African man was a Christian by the time he died, and that he was not just a servant or slave. "He would have had to been of some note to be buried in the friary," said Xanthe Mallett, one of the members of the Centre for Anatomy and Human Identification who is part of the show.

According to programme notes for History Cold Case, the show will reveal a facial reconstruction and "discover the tragic truth about how he died."

According to the Times, three people identified in tax records as black Africans lived in England in the fifteenth century.

Earlier this year it was revealed that the remains of an African woman living in the city of York during the 4th century AD. Click here to read the article Africans in Roman York?