Medieval manuscript of the Quodlibeta bought by CUA 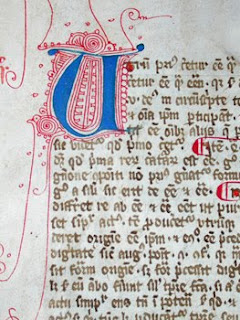 A medieval manuscript containing a portion of the Quodlibeta by Godfrey of Fontaines has been purchased by the Catholic University of America (CUA). The 14th century manuscript was recently bought at an auction.

“It’s the most exciting single acquisition made by Catholic University’s Rare Books and Special Collections since I was hired five years ago,” says Lenore Rouse, curator of that department at CUA’s John K. Mullen of Denver Memorial Library. “The fact that our auction bid was made possible by the generosity of a CUA professor makes this item even more special.”

A group of sponsors led by Monsignor John F. Wippel, CUA’s Theodore Basselin Professor of Philosophy, funded the successful auction bid, which received additional contributions from Mullen Library and gifts from CUA’s School of Philosophy and from Rouse.

With colorfully illustrated initial capital letters beginning each chapter or section, the manuscript was produced some 100 years before the invention of the printing press. The pages of the manuscript are vellum — made from the skin of sheep, calves or goats — rather than paper. The letters of the text, written with a quill pen, appear very regular in shape and size — so neat that they seem at first glance to have been printed on a press rather than handwritten.

Scholars were unaware of the existence of this manuscript until February of this year when it was announced in the sale catalog of a Belgian auction house, says Monsignor Wippel. A sentence at the end of the manuscript indicates that the volume may in the past have been owned by a Franciscan monastery somewhere in Europe.

Godfrey of Fontaines, one of the leading philosopher/theologians of his day, who is believed to have lived from around 1249 to either 1306 or 1309. A professor at the University of Paris, Godfrey himself had studied at that university while St. Thomas Aquinas was on the faculty.

The newly acquired manuscript is Godfrey of Fontaine’s most important work, the Quodlibeta, a word which translates as “Whatever you’d like” and is the name of a type of free-for-all scholarly question-and-answer colloquium.

As part of the standard framework for philosophical and theological debate, a medieval professor would convene students and fellow faculty members to answer any and all questions they wanted to pose (e.g., “Whether the world is eternal or at some point of time began to be”). Such questions and responses form the text of CUA’s recently acquired manuscript, containing the third to the 12th quodlibetal sessions of Godfrey, which took place between 1286 and 1297.

“At present, the only published edition of Godfrey’s Quodlibeta is one issued in Belgium from 1904 to 1937, a work which is known to contain numerous errors,” says Rouse. “The necessary work of producing a new and better critical edition can be undertaken only if unpublished manuscripts like this one remain available to scholars in a research library such as CUA’s.”

In arriving at Catholic University, the 194-page manuscript has found an appropriate home, says Rouse, since Monsignor Wippel is widely considered to be the world’s leading expert on the philosophy of Godfrey of Fontaines, and the university has a strong reputation in the study of medieval philosophy. Wippel has written the book The Metaphysical Thought of Godfrey of Fontaines: A Study in Late Thirteenth-Century Philosophy

, as well as many scholarly articles about Godfrey’s thought.