Grave of Charlemagne remains a mystery

Archaeologists searching for the burial place of Charlemagne have failed to find any evidence that the body of the Carolingian emperor was placed in the atrium of Aachen Cathedral.

Andreas Schaub has led a team of archeologists for over three years in an attempt to find the exact spot within the cathedral where the medieval ruler was buried on the 28th January 814. But the dig within the atrium of the 8th century cathedral has only turned up material dating back to the 13th century.

There have been several archaeological investigations of the cathedral. Andreas Schaub noted that "since the 1980s, the theory persisted that the grave is in the atrium." With this news, focus on the whereabouts of Charlemagne will turn to the Cathedral's Court.

Charlemagne was buried in Aachen on the same day he died. Although the Carolingian emperor had previously made it known that he was to be buried near Paris, his court officials decided to bury him in Aachen because of the difficulty in transporting his body in cold weather.

The body of Charlemagne has had an eventful existence since his death. In the year 1000, Otto III had Charlemagne's vault opened. The Chronicle of Novalesia records how Otto and one of his courtiers saw when they entered the vault:

"So we went in to Charles. He did not lie, as the dead otherwise do, but sat as if he were living. He was crowned with a golden crown and held in his gloved hands a sceptre; the fingernails had penetrated through the gloves and stuck out. Above him was a canopy of limestone and marble. Entering, we broke through this. Upon our entrance, a strong smell struck us. Kneeling, we gave Emperor Charles our homage, and put in order the damage that had been done. Emperor Charles had not lost any of his members to decay, except only the tip of his nose. Emperor Otto replaced this with gold, took a tooth from Charles’s mouth, walled up the entrance to the chamber, and withdrew again." 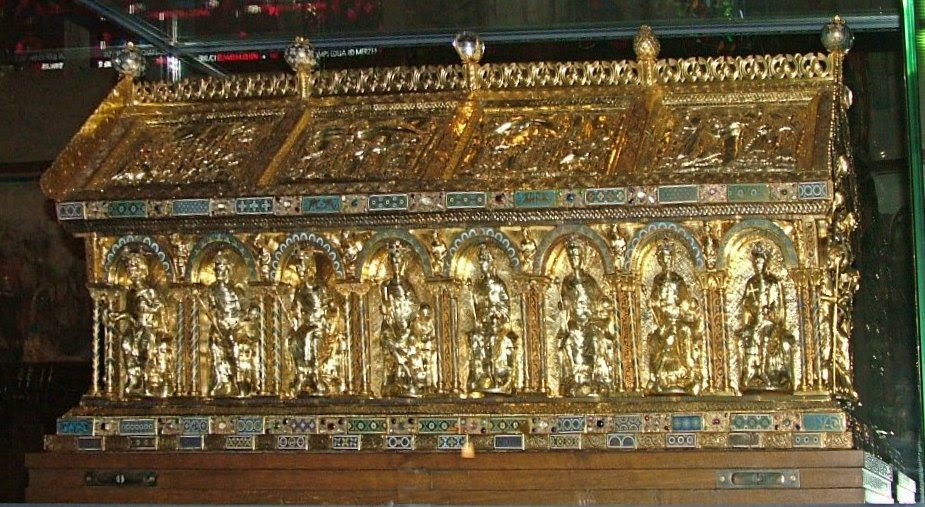 In 1165, Emperor Frederick Barbarossa again opened the vault and placed the remains in a sculptured sarcophagus made of Parian marble, said to have been the one in which Augustus Caesar was buried. The bones lay in this until 1215, when Frederick II had them put in a casket of gold and silver. A vellum codex found interred with him was removed.

There have been eight theories about the burial place of the Carolingian ruler. "We have definitely ruled out five of these with the recent excavations," explained Cathedral architect Helmut Maintz. "But there are fortunately a few theories left, so I am not hopeless."