English Heritage has completed a major repair and conservation project for one of London’s oldest buildings and a meeting place for the early House of Commons – the Chapter House at Westminster Abbey. Over the past 18 months, a team of 20 master carvers and stonemasons have painstakingly cleaned, repaired, and conserved the badly weathered gargoyles, stone floral friezes, flying buttresses and stained glass windows. This month, the colossal scaffolding has come down to reveal the majestic exterior completely refreshed, revived and weather-tight. 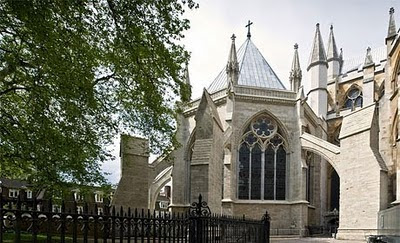 Simon Thurley, Chief Executive of English Heritage, said, “The Chapter House is one of England's most interesting and significant monuments, witness to great events in our early history and repository of the nation’s history and memories for 300 years. I'm proud to say that English Heritage has been able to secure its future with one of our most comprehensive programmes of conservation ever.”

In keeping with both the medieval tradition and the great Victorian reconstruction of the Chapter House in 1866 by architect George Gilbert Scott, today’s stone carvers have added 32 new heads to the building’s eight pinnacles, replacing those Victorian heads which had become unstable through erosion. There are 64 heads in total across eight pinnacles, and the new heads are portraits of the people involved in the ambitious project. They include the masons and architects, members of the Westminster Abbey clergy, and the project team from English Heritage. Four new striking gargoyles have also been created. The new carvings add a layer of 21st-century history to the Chapter House and are a testament to the outstanding quality of work of today’s carvers and craftsmen.

The Chapter House was completed around 1255 and described as ‘beyond compare’, the octagonal chamber served not only as the daily meeting place for the monks of Westminster Abbey but as one of the venues for King Henry III’s Great Council and the Commons, predecessors of today’s Parliament. In the mid-16th century, the Chapter House became a store-house for the records of the Exchequer, eventually requiring massive alterations to create more floors for document cupboards, and to make the building stable: by the middle of the 19th century, its original form was unrecognisable.

Between 1867 and 1872, Scott led the thorough restoration of the Chapter House, re-creating the medieval exterior and revealing the original tiled floors and wall paintings inside the building. It was opened to the public as a historic monument and today – given its royal past as a meeting place, parliament chamber and record office.

The Very Reverend Dr John Hall, Dean of Westminster, said, "The Chapter House is a remarkable building and a very significant part of the 13th century monastic enclosure, happily now open to all the Abbey's many visitors. It now once again looks strikingly beautiful as a result of the initiative and excellent work of English Heritage, with whom the Dean and Chapter of Westminster are delighted to be in partnership."

In the 140 years since Scott’s ‘makeover’, ivy, decades of smoke from Battersea Power Station, traffic pollution and the weather had all taken their toll on the building’s stone exterior. Nimbus Conservation was contracted by English Heritage to undertake the £3m programme of repairs. The Chicksgrove Quarry in Wiltshire has been their source for 60 tonnes of new stone – a type that most closely matches the Chilmark stone used by Scott’s masons and is remarkably resilient to weathering. Many hours have been spent in creating drawings and clay models. The majority of the stone was carved on site by Nimbus’ team of masons and master craftsmen.

Angus Lawrence of Nimbus Conservation, said, “Nimbus has been able to assemble an unrivalled team of talented craftsmen and women covering a diverse range of skills. Everyone, from the labourer to the master carver has made an important contribution to the conservation of this wonderful building and we are all extremely proud of the end result."

The Chapter House is in the East Cloister of Westminster Abbey. Admission is free via the Cloister Entrance in Dean’s Yard. It is under the care and management of the Dean and Chapter of Westminster. For more information please visit www.westminster-abbey.org