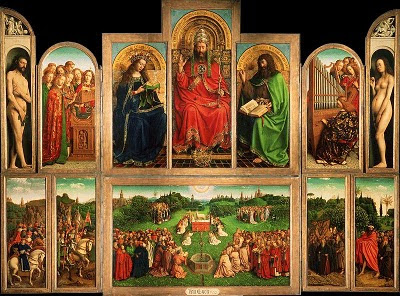 The Getty Foundation has awarded $630,000 for the preservation of two major works of art: The Mystic Lamb by Hubert and Jan van Eyck (the Ghent Altarpiece) of 1432 and The Last Supper by Giorgio Vasari of 1546. These grants are part of the Getty’s Panel Paintings Initiative, an international effort to train conservation specialists to ensure that important and intricate works of art such as these survive for future generations.

The tradition of painting on wood panels was widespread in Europe from the late 12th through the 17th centuries. Panel paintings are among the most significant works in American, European, and Russian museum collections and in religious buildings, including works by Duccio di Buoninsegna, Leonardo da Vinci, Peter Paul Rubens, and Rembrandt van Rijn. Unfortunately, many of these works are now threatened by serious problems due to the warping, cracking, and splitting of the wood on which they are painted, requiring highly specialized care and conservation not only of the painted surface, but also of the underlying structure.

It takes years of practice for a conservator to develop the surgical skills required for intervention and treatment. Today, there are only a handful of experts fully qualified to conserve these paintings, and nearly all of these experts will retire within the next decade. The Getty Foundation, Getty Conservation Institute, and J. Paul Getty Museum together designed the Panel Paintings Initiative to ensure that the next generation of conservators is prepared to take their place.

The new grants, totaling $630,000, to De Nederlandse Organisatie voor Wetenschappelijk Onderzoek (Netherlands Organization for Scientific Research, or NWO), and the Opificio delle Pietre Dure e Laboratori di Restauro (OPD in Florence, Italy), bring the total amount awarded by the Getty Foundation through the Panel Paintings Initiative to nearly $1 million. Previous grants have funded a survey of significant museum collections of panel paintings and of professionals in the field undertaken by the Statens Museum for Kunst in Copenhagen, and a collaborative project between the Metropolitan Museum of Art in New York and the Prado Museum in Madrid that resulted in the conservation of the great Adam and Eve by Albrecht Dürer.

The new grants were be announced during press conferences on May 5 in Ghent, Belgium, and May 12 in Florence, Italy, and will detail conservation projects for the Ghent Altarpiece and The Last Supper, respectively. The NWO and OPD will use the funds to train advanced, mid-career, and young conservators working alongside world-renowned experts on the conservation of these historic paintings.

“We are delighted to provide these grants and to collaborate with the OPD and the NWO,” said Dr. Deborah Marrow, director of the Getty Foundation. “The complexity of the work on the Ghent Altarpiece and Vasari’s The Last Supper will afford an unparalleled learning experience for future panel conservators under expert supervision. These significant projects will serve as models for future grants in our larger Panel Paintings Initiative.”

Added Getty Foundation Program Officer Antoine Wilmering: “This initiative would not be possible without the group of international experts with whom we are working. Their commitment to reaching out to the next generation of conservators and passing on their acquired knowledge is essential to the success of the program.”

The Ghent Altarpiece is one of the most recognized works of art in the world. Begun by Hubert van Eyck and completed by his brother Jan in 1432, the altarpiece was painted for the Saint Bavo Cathedral of Ghent. It is a structurally complex work of art, composed of 18 separate oak panels, that has suffered many types of damage during its long history.

In the 16th century, the altarpiece was dismantled and hidden twice for protection from iconoclastic riots and then during the Calvinistic Republic. Two centuries later, it was taken to Paris by French troops as a war trophy. During the 19th century, six panels of the wings of the altarpiece were sold off separately, split lengthwise, and “cradled” – a popular but damaging restoration process of the past that forced the panels to lie straight and flat. The work, reassembled after World War I, subsequently had one panel stolen, and was hidden again during World War II, recovered by Allied forces and finally, brought back to the Ghent Cathedral, where it has since remained. Over the centuries, the large altarpiece (measuring 11 by 14 feet) has undergone numerous cleanings and conservation efforts, the last of which took place in the early 1950s. Despite regular care provided through the Diocese of Ghent, today its paint is lifting and joints are splitting.

The $230,000 Getty grant to the NWO covers a state-of-the-art conservation investigation, a condition assessment, and training for three post-graduate and several mid-career conservators to work with experts under general project supervision provided by Professors Anne van Grevenstein-Kruse and Ron Spronk.

“We are very pleased to work with the Getty Foundation and the international team of experts led by Professor Anne van Grevenstein-Kruse and Professor Ron Spronk on this important project,” said Dr. Louis B.J. Vertegaal, director at NWO of a science cluster which includes Chemistry, Computer Sciences and Mathematics. “This project brings together art historians, scientists, and conservators to contribute to a more integrated and objective approach to conservation practice and to educate the next generation of multidisciplinary researchers in the field.”

The Ghent project began last month and is slated for completion in December 2010, when the results will be shared with experts and the public through lectures, seminars and workshops, as well as on the Web.

Giorgio Vasari, the 16th century painter and architect, is perhaps best known as the “father of art history” because he originated the genre of artist biographies. Among his many paintings in Florence is the monumental Last Supper, commissioned in 1546 by the nuns of the Florentine Murate Convent. This large painting was moved several times over the centuries before it was relocated in the early 19th century to the Basilica of Santa Croce in Florence.

In 1966 the Last Supper was severely damaged during the disastrous flooding of the Arno River, and the public has not seen it since. Although the painting received emergency treatment after the flood, due to the complexity of its conservation challenges it was never fully restored, and it remains one of the most significant works of art to survive the onslaught of mud and water. Comprised of five major panels, it is large in scale (more than 8 by 21 feet). In 2004, the painting was transferred to the Fortezza da Basso for further study and analysis by the OPD.

With the Getty grant to the OPD of $400,000, seven conservators at the advanced, mid-level and post-graduate levels will have the unique opportunity to train side-by-side with leaders in the conservation field, Ciro Castelli and Mauro Parri.

"The Opificio delle Pietre Dure e Laboratori di Restauro has a long history in the conservation of panel paintings, as well as a long relationship with the Getty,” said Isabella Lapi Ballerini, superintendent of the OPD, one of the world's most prestigious art conservation and restoration laboratories. "We share the Getty’s concern for the need to prepare future conservators so they have the proper skills to care for panel paintings. We are grateful for the opportunity to work in partnership with the Getty in restoring Vasari’s Last Supper and to make it once again accessible to the public."

The project is scheduled to begin in May and is expected to be complete by mid-2013. The finished result will be shared through a joint exhibition with the OPD and the Opera di Santa Croce Museum, and in a book on the restoration process.